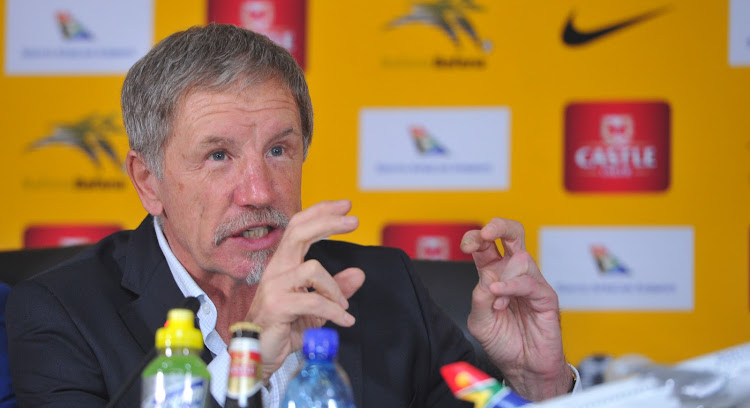 Bafana Bafana coach Stuart Baxter has defended his decision to call-up China-based Dino Ndlovu to the squad to face the Seychelles in back-to-back 2019 African Nations Cup qualifiers later this month.

Baxter has said in the past that the Ndlovu's previous league in  Azerbaijani was ‘‘probably not the best in the world”‚ but it seems he does not have similarly stronger views about the Chinese league after naming Ndlovu in the squad to face the islanders on Monday.

The Briton said with SuperSport United striker Bradley Grobler out injured‚ he viewed Ndlovu as an able replacement in the two must-win games.

‘‘Listen‚ we have got Bradley (Grobler) out and we are looking for a striker. You look at the strikers that are hitting the back of the neck regularly‚ Dino is doing that.... he’s doing that‚” Baxter said.

‘‘Now I think against a team like the Seychelles‚ we will need a bit of muscle.

‘‘I think that is a decent balance of front players and I think that if Dino plays‚ he will believe he will score.”

Bafana have struggled to find the back of the net in recent times and could not even punish Libya in a 2019 African Nations Cup qualifier that ended in a potentially costly 0-0 draw at the Moses Mabhida Stadium last month.

‘‘I am not sure how many strikers we have available to us that believe they are going to score‚” Baxter said.

‘‘It is always an issue and you always grill me on this after games when we do not score. ’Why don’t we produce goal scorers.’

‘‘And I have seen some of the goals (Ndlovu) has scored and they are good goals‚ even against the opposition.

‘‘So I think he’s well worth bringing into the squad to maybe be a little bit infectious with his belief in his own ability.

‘‘I think that is one of the reasons we have brought him in.”

Baxter said injuries forced him to make several changes and he will have to do without Grobler‚ Themba Zwane‚ Keagan Dolly‚ Bongani Zungu and Siphesihle Ndlovu.

Bafana will host the first qualifier against the Seychelles at the FNB Stadium in Johannesburg (3pm) on Saturday October 13.