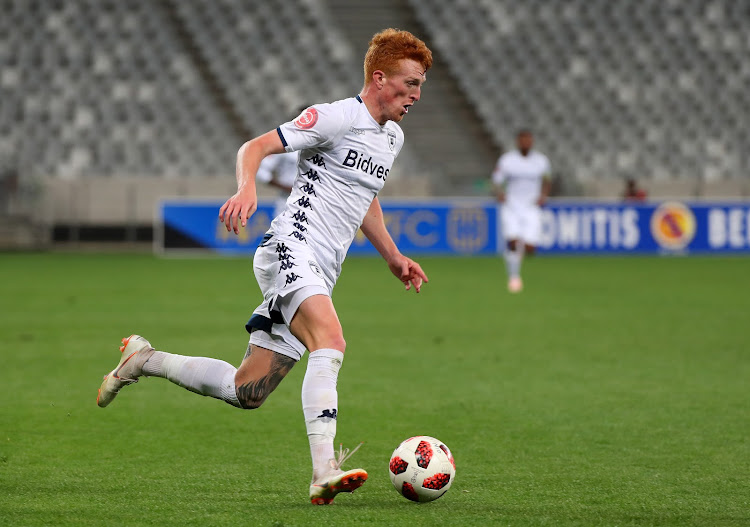 Bidvest Wits's Scottish striker Simon Murray in action during the 2-0 Absa Premiership win, in which he scored both the goals, against Cape Town City FC at Cape Town Stadium in Cape Town on October 2 2018.
Image: Chris Ricco/BackpagePix

Scottish striker Simon Murray has been introduced to the South African game cautiously and Bidvest Wits coach Gavin Hunt feels he has got it spot on after a pair of goals from the new signing on Tuesday.

The 26-year-old Murray netted both strikes‚ and was named man of the match‚ as Wits went back to the top of the Absa Premiership standings with a 2-0 away win over Cape Town City.

It was his first start since joining the club.

“He’s come from a different mentality.

"He can’t speak English … that’s half the problem‚” joked Hunt of the broad Scottish accent of player.

“But seriously‚ in South Africa the midfield players look at you‚ then look somewhere else and don’t pass you the ball.

"It is difficult when you come from Europe and are making all the runs and not getting the passes.

“We have to change that mentality‚” he added.

"But let’s see if it continues. He should have gone into the team straight away but I thought ‘no‚ let’s leave him a little bit and bring him on a bit slower’.

“He got three goals now so it seems like it’s worked and he’s got better at training and that’s important.”

Asked whether Murray could solve the goal scoring woes at Wits‚ Hunt responded: “Please God! Come back after 30 games and I’ll tell you.

“But we signed him to score. I’ve always said that if you can find a striker who can get you around 12 goals and above in a season‚ then you’ve got a chance to win the league.

“It’s different up on the Highveld because the ball doesn’t come on and I knew it would be better for him in Cape Town because it is similar to where he comes from in terms of the weather and that kind of stuff‚” said Hunt.

Wits are next up against champions Mamelodi Sundowns away at Atteridgeville on Sunday.

MTN8 winners Cape Town City were brought back down to earth after weekend cup success as Simon Murray scored twice to take Bidvest Wits back top of ...
Sport
3 years ago

Benni McCarthy sent out a heartfelt apology to the 5000-odd Cape Town City supporters who braved a chilly night on Tuesday‚ only to see their team ...
Sport
3 years ago
Next Article