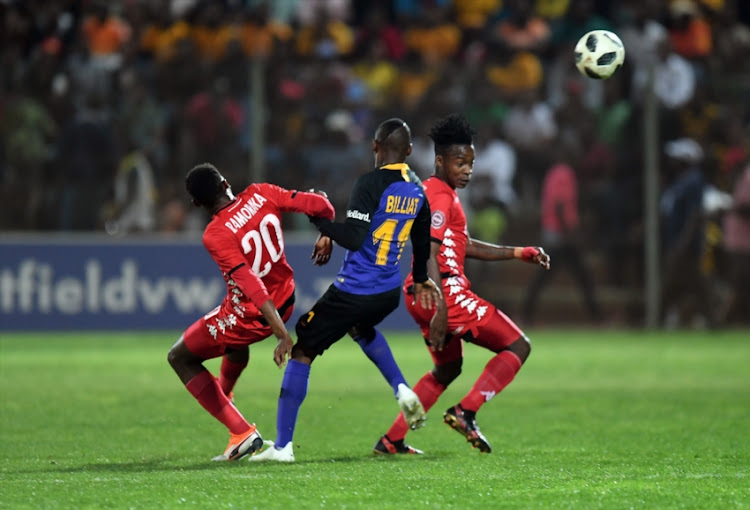 This could so easily have been Highlands Park's second Absa Premiership victory of the season as they matched, and for large periods, outplayed Kaizer Chiefs in a 0-0 draw at Makhulong Stadium on Tuesday night.

Just Highlands' shyness in front of goal denied them. Football must go back to the townships.

This may have been a goalless draw but if all games could be played in a stadium, and in front of a crowd, like this, no-one would be complaining about dull soccer any more.

Chiefs coach Giovanni Solinas had out his now-favourite lineup - essentially the one that beat Cape Town City 4-1 away, then AmaZulu 2-0 at home, on either side of a 2-0 away win against Free State Stars with a near-B team.

Just Gustavo Paez came in for Bernard Parker up-front from the XI that faced AmaZulu.A fast-paced, entertaining matchup arose from an exciting atmosphere provided by the close environment of a noisy, compact township stadium.

Highlands came out fired up for this match in front of their packed.

Owen Da Gama's side have been solid this season, even against the big clubs, but struggled to penetrate going forward.

This was about the promoted team's best attacking performance.

They owned the first half, pressing Chiefs back, their solid organisational pattern snuffing out any form of Amakhosi attack.

Highlands had a string of chances, from as early as the third minute when Peter Shalulile shrugged off his marker and curled one close to Itumeleng Khune's top-right corner.

Park right wing Lindokuhle Mbatha gave Godfrey Walusimbi a tough first half, lining one up in the 25th that had Khune stretching.

Chiefs' only chance came from a Highlands mistake, right-back Luckyboy Mokoena giving the ball away for Paez to feed Dumisani Zuma inside, who forced a save from Tapuwa Kapini.

Park left-back Thabo Motlafi popped up on the right of Chiefs' area to pull one back, Mothobi Mvala unable to connect what should have been a goal in the middle before Moeketsi Sekola shot at Khune.

Chiefs' first genuinely manufactured chance came as Zuma headed Paez's cross over in the 55th, as the second half continued at a cracking pace.

Amakhosi had shored up their defence, closed the spaces quicker, and limited Highlands' chances better.

But the team with all the facilities, the coaching staff, the training methods; the side with a village, continued to struggle to break Highlands' 11 lads playing like supermen down.

In the 72nd Siphelele Ntshangase pushed Khama Billiat through, Kapini spreading himself and putting the Zimbabwean off, whose shot slipped wide.

Ekstein, as can be his downfall, missed a sitter that could have earned Chiefs a win at the end.