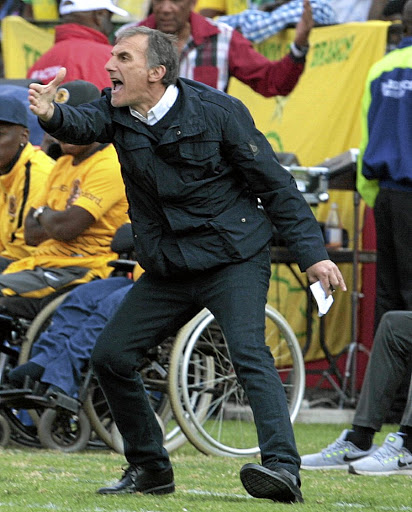 Kaizer Chiefs head coach Giovanni Solinas says all he needed was time with the team at training to get them humming again.
Image: Veli Nhlapo

The refrain that a week is a long time in politics now holds true in football as it has taken seven days for relations between Kaizer Chiefs fans and coach Giovanni Solinas to take a turn for the better.

While Solinas has not yet delivered a cup to Naturena, he has at least now earned the trust of the Amakhosi
faithful.

It started on September 15 with a 4-1 win over Cape Town City. This was followed by back to back 2-0 wins over Free State Stars on September 18 and AmaZulu at the weekend.

In a short space of time, Solinas has pulled off an Italian job on the fans.

Chiefs supporters can be forgiven for walking with a bit of a spring in their step following the change in fortunes.

After three years of anguish, their tolerance level had sunk to an all-time low, which is why Solinas endured a somewhat hostile reception in the beginning.

But now, he has laid the groundwork and has the respect that will allow him to do his job without being second guessed.

Solinas had said all he needed was a little more time to get his machine in motion.

"In football you need time to improve. A lot of training sessions are needed to fix mistakes," the Italian said.

"We started with a handicap because of no pre-season and had many games in short [spaces] of time. I don't have a magical wand.

"The instrument to fix mistakes is training sessions. [At first] we had no time to understand the philosophy."

With Chiefs third in the standings with 13 points from eight games, Solinas appreciates that the time has not yet come to hold a celebration parade.

"Also we need to continue to improve. Three wins is nothing for Chiefs. This is normal for Chiefs, we need to remain humble and keep our feet on the ground."

Amakhosi will get a chance to continue where they left off when they meet Highlands Park on October 2.

NFD champions Highlands Park are also aiming for victory to solidify their stay in the Premier League.