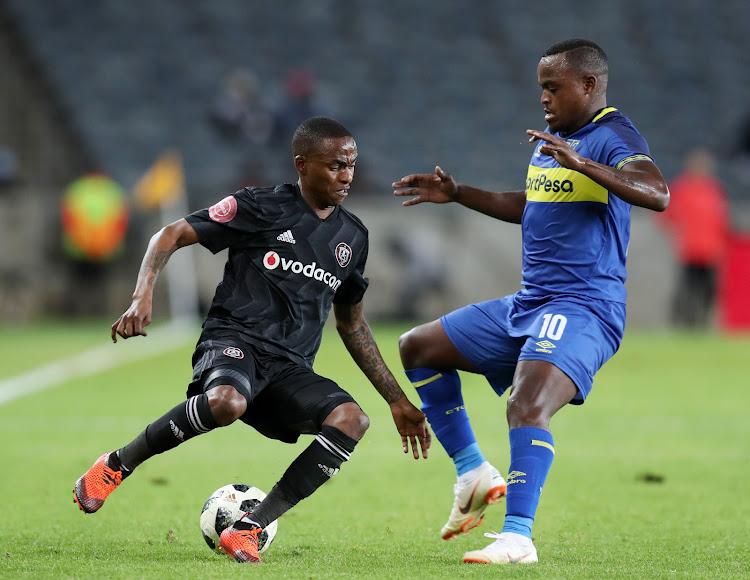 It was Ayanda Patosi versus the Buccaneers as the forward's second-half brace saw Cape Town City fight back from 2-0 down and earn a 2-2 Absa Premiership draw at Orlando Stadium on Wednesday night.

The increasingly deadly Augustine Mulenga put Pirates ahead in the eighth minute. Innocent Maela headed in a second in the 16th.

Patosi pulled one back with a stunning volley from range in the 69th. Then his free-kick eluded everyone to sneak in as a 77th-minute equaliser.

City, having taken a 4-1 at Cape Town Stadium on Saturday, suffered a further blow of coach Benni McCarthy not travelling because wife Stacey was admitted to hospital with a collapsed lung. Assistant-coach Vasili Manousakis took charge on the bench.

Pirates made one change from their 3-1 defeat of SuperSport United here on Saturday night, Thembinkosi Lorch coming in on the left of a front three for Linda Mntambo.

Bucs, after a tough August, have switched recently back to a 3-4-3 that served them well last season. Given the energy of wingbacks Thabo Matlaba and Paseka Mako, Pirates can have numbers in attack and defence, depending on if they have possession or not. The midfield pair of the squirreling Ben Motshwari and swaggering Xola “Ten-Ten” Mlambo allows for plenty of cover or support in either scenario.

That's all very nice in theory. But Pirates still can struggle for a killer instinct in the lead.

And Patosi punished them for it.

City made a panicky seven changes from their thumping by Chiefs, including the enforced Kouassi Kouadja for suspended Taariq Fielies, who was red-carded against Amakhosi. A new-look defence had three changes. It showed, especially in the first half.

Bucs came out pressing those wingbacks high, moving the ball like a taxi in rush hour on the nearby Soweto Highway.

They took the lead far too easily. Mulenga's run peeling off cumbersome Kwanda Mngonyama to Lorch's chip was beautifully timed but took advantage of a gap in a static central defence.

From a Pule corner Ntsikelelo Nyauza’s header was cleared as far as Happy Jele, whose shot was deflected into the side-netting.

From the resultant corner, by Pule, Innocent Maela ghosted in to head past Leeuwenburgh.

Pirates’ clear weakness is that they're still far from clinical closing games.

Nyauza's weak clearing header fell for Patosi to chest and volley the type of spectacular strike we used to see on YouTube when the mercurial forward played in Belgium.

Patosi got another with a touch of fortune as his free-kick from the left was aimed as a low bouncing cross, and snaked past everyone, including Mpontshane.