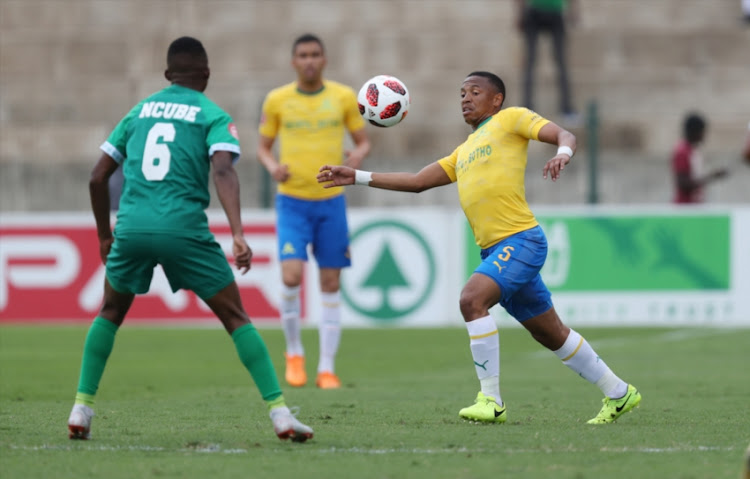 AmaZulu and premiership champions Mamelodi Sundowns shared the spoils in a six-goal thriller that was a great advert for South African football at King Zwelithini Stadium in Durban on Sunday afternoon.

The two side played to a 3-3 draw in a highly entertaining Absa premiership encounter that had fans at the edge of their seats for the full 90 minutes.

AmaZulu took the lead as early as the fifth minute when Butholezwe Ncube grabbed the lead with a low strike that reached the bottom corner after Andile Jali was robbed of possession in a dangerous area.

Jittery Sundowns goalkeeper Reyaad Pieterse was certainly the busier of the two goal minders throughout the first half and was called into action again on the stroke of halftime when he made a relatively comfortable save from Ncube’s shot on goal direct from a free kick.

Sundowns‚ who made number changes to their starting line-up‚ were finding it difficult to get going inside the first quarter of an hour while the home side were buzzing going forward.

Debutant Phakamani Mahlambi brought Sundowns back into the game a minute before half-time with a close range shot at the near post‚ getting a second bite of the cherry after a mistake from AmaZulu goalkeeper Moeneeb Josephs.

The two sides went to to toe towards the end of the first half but failed to find the back of the net. They went into half time break level at 1-1.

Sundowns doubled their lead in the 45th minute when Bissau-Guinean forward Tony Silva played a one-two with Hlompho Kekana to beat Josephs and give the visitors a 2-1 lead.

But Amazulu came storming back when Jabulani Ncomeni equalised for the hosts in 73rd minute.

Usuthu then took control of proceedings through Bonginkosi Ntuli who burst into the box and fired past Pieterse to make it 3-2.

Sundowns continued to search for the equaliser and it was Sibusiso Vilakazi who found the back of the net with five minutes remaining after getting at the end of a cross from Tebogo Langerman at the near post.

Usuthu were desperate for a victory having lost 3-0 to Bidvest Wits in their previous league game‚ which was played in Johannesburg last month.