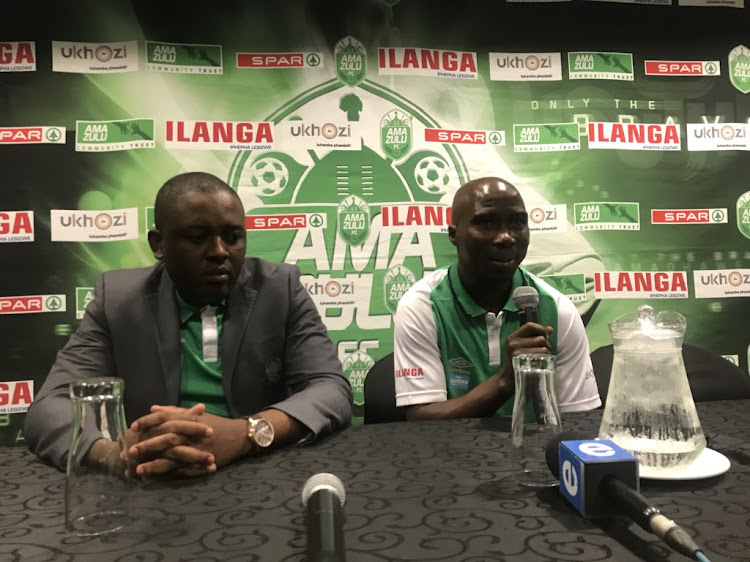 Veteran AmaZulu FC striker Siyabonga Nomvethe has disclosed that he is using the current campaign to wind up on his illustrious 21-year professional football career‚ which started at the now defunct African Wanderers back in 1996.

The 40-year-old former Bafana Bafana striker told a press conference in Durban on Friday that he would officially retire from competitive football at the end of the current 2018-19 season for Usuthu.

He said it was now time to leave the field of play to the youngsters‚ as he felt he has achieved all he could possible do.

“I would like to thank all those who supported me throughout my career‚” said the soft-spoken player‚ who was born in KwaMashu township in Durban.

After Wanderers – the team where he starred alongside a young Sibusiso Zuma‚ Phumlani Mkhize and Arthur Bartman – were relegated in 1996/97‚ Nomvethe was snatched up by Kaizer Chiefs‚ who sold him to Udinese in Italy’s Serie A in 2004.

Struggling to break into the starting lineup‚ Nomvethe was loaned to two Italian clubs – Salernitana and Empoli FC – before being sold to Swedish club Djurgårdens in 2005.

He returned to SA to play for Orlando Pirates in 2006 before returning to Europe‚ this time joining Aalborg BK of Denmark. Nomvethe resurfaced at Moroka Swallows on a free transfer in 2009.

It was with the Birds where Nomvethe made his indelible mark in SA football‚ culminating in him winning the coveted Footballer of the Year award in 2011-12‚ the season he also finished as the league’s top scorer with 20 goals. Swallows ended runners-up under Gordon Igesund.

Nomvethe joined AmaZulu in 2016 and helped them maintain their Premiership status last season.

The striker won 78 Bafana caps‚ scoring 16 goals. He represented South Africa in two Fifa World Cup finals tournaments in 2002 in Korea/Japan and on home soil in 2010‚ playing as a substitute in SA’s 2-1 Group A win against France in Bloemfontein.

Nomvethe was also in Shakes Mashaba’s star-studded Under-23 squad that managed to beat Brazil 3-1 at the 2000 Olympics in Sydney.

He scored against Brazil and Japan at that tournament.

Nomvethe said on Friday that after retirement he will not be lost to football as he intends to be involved in introducing young players to Usuthu.

“What I can say to the youngsters is that they must respect the game‚” he said.

“They must always stay away from the parties‚ alcohol‚ drugs and a lot of girls. Those are things that may hinder them from achieving and lasting longer in the game the way I did.”

AmaZulu out to capitalise on vulnerable Sundowns in Durban

AmaZulu FC striker Mhlengi Cele is hoping his club will capitalise on the recent poor results of Mamelodi Sundowns when the two clubs meet at the ...
Sport
3 years ago

Mamelodi Sundowns will be fired up to atone for their Caf Champions League and MTN8 exits when they meet AmaZulu in the Absa Premiership at King ...
Sport
3 years ago
Next Article