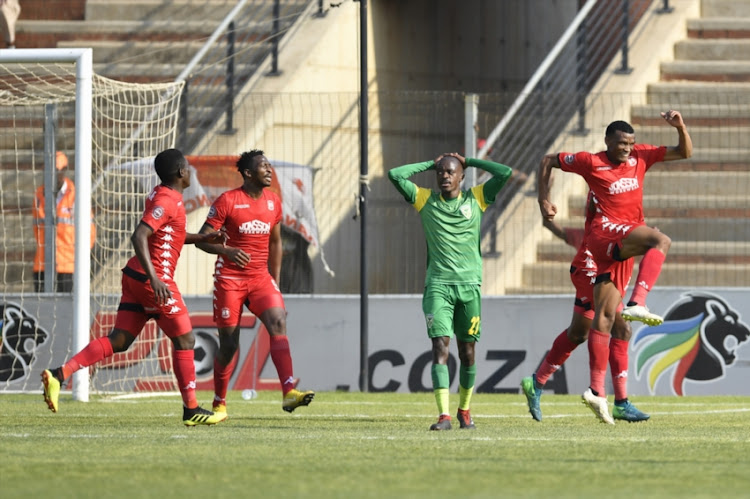 Highlands Park registered their first win of the season after a 2-1 Absa Premiership victory over Lamontville Golden Arrows that took them into the top half on the log standings.

The Lions of the North roared to a 24th minute lead from the penalty spot after Botswana international defender Lesenya Ramoraka was tripped by Knox Mutizwa in the box.

Mothobi Mvala stepped up and gave Nkosingiphile Gumede no chance in the Arrows goal to make it 1-0.

The advantage didn’t last long for Highlands as Danny Venter equalised for the visitors with a soft low free kick that had no business troubling Tapuwa Kapini.

But it did‚ leaving coach Da Gama hopping mad on the touchline.

Highlands regained the lead ten minutes before the half time break as Mvala grabbed his brace with a clinical poke into the net after Arrows keeper Gumede failed to hold on to a delightful cross from Lindokuhle Mbatha.

Highlands looked the more enterprising side in the opening exchanges and pinned the visitors in their own half with Mbatha pulling the strings in midfield and enjoying space to shoot at goal.

Arrows were poor in the first half as Highlands dictated terms and the visitors from KwaZulu-Natal were lucky to go into the break trailing by a single goal.

Highlands came out firing after the break with Mbatha hitting the woodwork and Gumede having to make save after save in the Arrows goal.

The Lions of the North went into the match as one of two sides‚ alongside Maritzburg United‚ who were yet to win a league match.

With the win‚ they join champions Mamelodi Sundowns‚ who were held to a thrilling 3-3 draw at AmaZulu‚ as the only two sides who are yet to taste defeat after five and four matches respectively.

Having drawn their opening four league matches‚ Highlands are now 5th on the log table with seven points from five encounters.

The win marks sweet revenge for Highlands‚ who lost both the league matches they played when they were still in the topflight in the 2016/17 season.