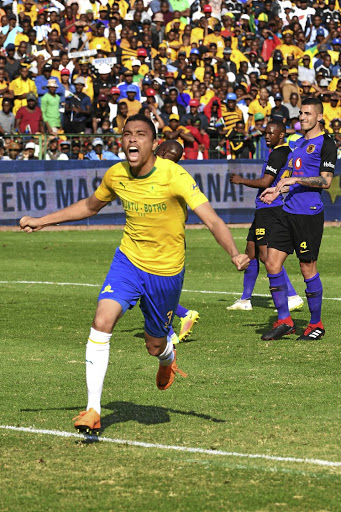 Ricardo Nascimento, who was sent off in the draw against Highlands Park, returns after serving his two-match suspension.
Image: Lee Warren/Gallo Images.

Mamelodi Sundowns are embarking on an invasion of KwaZulu-Natal where they will take on AmaZulu and Golden Arrows in back-to-back fixtures.

They will face Usuthu in the league at the King Zwelithini Stadium on Sunday (3pm), before facing Arrows at the Princess Magogo Stadium next Wednesday.

The defending champions have had a timid start to their title defence after starting the new campaign with two draws and a win.

But now they have the space to focus on their league form after their early CAF Champions League and MTN8 eliminations.

As a consequence, it will take Sundowns some time getting used to lengthy spells between their games.

The former African kings can only watch with envy as the knockout stage of the CAF competition starts today. They finished third in Group C to allow Wydad Casablanca and Horoya to advance.

The Brazilians have over the years been acclimatised to playing a game every few days due to their domestic and continental exploits.

This season, things are a bit different for the Chloorkop-based side as they only have the Absa Premiership to contend with.

After their brief stay in eThekwini, the team will have a two-week break before playing Bloemfontein Celtic on October 3.

The free time though could prove a blessing as coach Pitso Mosimane has once again been forced to rebuild his team after the departures of key players.

Mosimane and his technical team will use the time to come up with their best formation.

It has become the norm at Downs to reshuffle the team every season after having lost Leonardo Castro, Keagan Dolly and Bongani Zungu prior to that.

As notorious slow starters in the league, opponents better beware as this season the Tshwane giants could kick into higher gear earlier than usual.

Sundowns will be bolstered by the return from suspension of Ricardo Nascimento, who was sent off in the draw against Highlands Park and missed the two-legged MTN8 semifinal against Cape Town City.