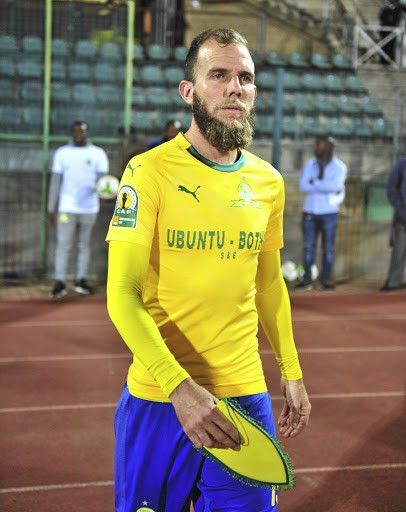 It looks like the New Zealander has dropped further down the pecking order at the Brazilians.
Image: BackpagePix

Before Jeremy Brockie moved to Mamelodi Sundowns from SuperSport United nine months ago, he was just three goals from reaching Abram Raselemane's record for the most goals for Amatsatsantsa.

Brockie hit the ground running after joining SuperSport in January 2015 with 10 goals in 17 appearances despite arriving halfway into the 2014/15 season.

To prove it was no fluke, he hit 18 goals in 37 matches the following season and since then, he's been one of the most feared strikers in the Premier Soccer League.

Well, that was until January when he switched to Mamelodi Sundowns and things have not been the same. For the Brazilians, he's yet to score in an official match in 19 appearances, which begs the question; what happened to his SuperSport form?

Brockie did score in the 2-1 win over Kaizer Chiefs in the Shell Helix Ultra Cup in July, which was a pre-season friendly.

Sundowns head coach Pitso Mosimane was also pleased with the combination of Toni Silva who scored and Jose Ali Meza that he deployed when they beat Cape Town City 1-0 in the MTN8 semifinals second leg at Lucas Moripe Stadium recently, only for them to lose 4-2 on penalties.

"We are not scoring goals at the moment, so it was good to push Ali Meza and Toni [upfront], because I had to change the combination of [Sibusiso] Vilakazi and Brockie.

"I'm happy I made the change and it's not easy to make a change. You got to be a little bit brave, but I did that and it worked out," Mosimane said.

So indications are that Jingles could keep faith in Silva and Meza when they travel to Durban to face AmaZulu at King Zwelithini Stadium this Sunday.

For now, it would appear that Brockie is further down the pecking order, but former Sundowns striker Kenny Niemach told Sowetan that no one should write off Brockie, despite his struggles for goals.

"Previously, you had Khama Billiat and Percy Tau, those two players had an understanding. Secondly, the team was structured to play for those two strikers.

"Now all of a sudden you have to change the dynamics and you don't have another player with the same X-factor as Billiat playing with the likes of Brockie," Niemach explained.

In comparison, Evans Rusike of SuperSport also took time to get going for Sundowns' crosstown rivals.

Following his move from Maritzburg United to SuperSport, also in January, the Zimbabwean scored just one goal in 12 league appearances.

But Rusike is now on four goals in seven games this season.

"It's very harsh for us to judge Brockie and say, he's not good enough to play there. So maybe the system itself doesn't accommodate him at the moment," Niemach said.