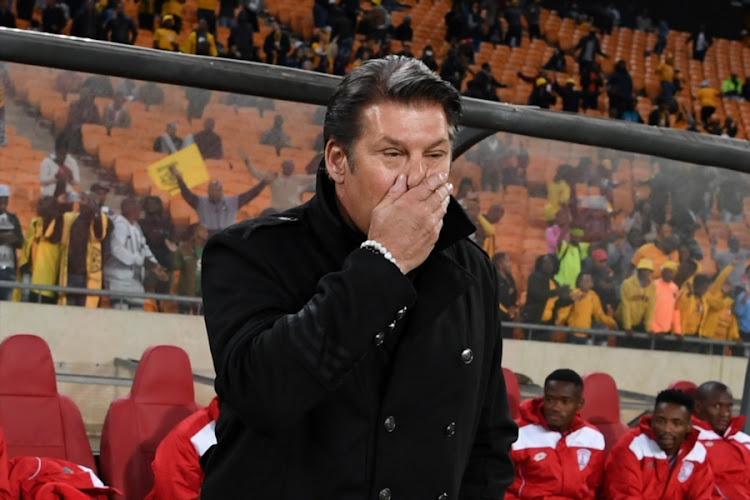 Free State Stars coach Luc Eymael believes his side have not got the luck they have deserved at the start of the new season but has predicted an upturn in fortunes after a slow beginning to the campaign.

The Nedbank Cup champions let a late lead slip against Cape Town City at Goble Park on Wednesday after two defensive errors in the game cost them goals‚ and now have four points from a possible 12 in the Absa Premiership.

There is two weeks before their next game away at Polokwane City on September 15 and Eymael admits he has been left a little frustrated by results so far.

“We deserve more points than we have now – in the last two games especially we have played very well‚” Eymael told SowetanLIVE.

“We created a lot of chances‚ but unfortunately we could not put the ball in the back of the net. Then against Cape Town City both goals were a little comical and unlucky.

“But we will work to try and improve it. I cannot say that I am happy with four points‚ but it is the same amount we had after five games last season.

“The bosses are very happy with the way we play‚ it is just a matter of the small details that make a difference in football.”

Eymael admits that he does have some concerns over his defence. This especially after the City game when goalkeeper Olivier Kwizera dropped a routine catch and was then unlucky as the ball rebounded in off his head after it had struck the crossbar from a deflected cross‚ allowing Matthew Rusike to score the first for the visitors.

“My concern is the number of goals we have conceded‚ but when you see the kind of goals we conceded in the last game … you never expect the goalkeeper to drop the ball like that‚” Eymael said.

“We are making individual mistakes‚ which is difficult to plan for as a coach. But in soccer the most important thing is to remain focused and not panic. We are playing well and creating good chances.

“For me it is much worse if you don’t create chances in a game. Then it is a real problem.

“But if we win our next game we will be on seven points and maybe in the top six. We can compete with all the teams [in the PSL].

“We are still there‚ now it is just a matter of having a bit more luck and being more clinical in both boxes.”