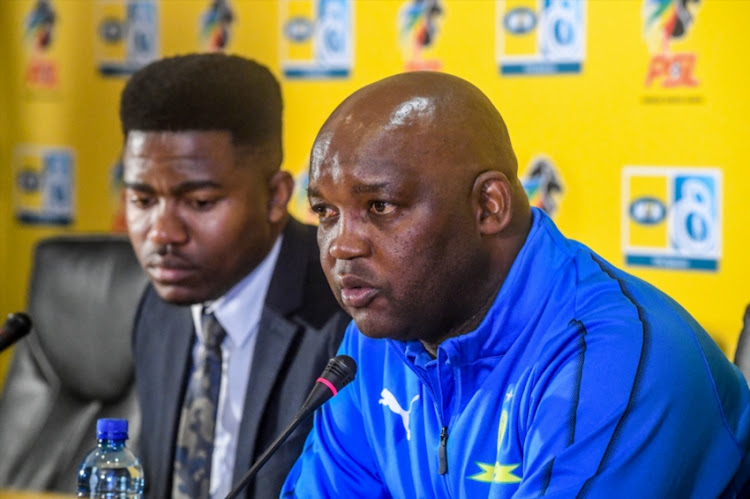 Sundowns have not won in their last four matches in all competitions and what will soon make Mosimane start losing his sleep is the fact his team has failed to score in that winless run.

“It’s obvious I am jealous when I see them [Billiat and Castro] combining well and scoring goals [for Chiefs]. I’m a human being – why not?” said the Caf Champions League-winning coach on Thursday.

“But reality is that you have to move on. It is what it is. It’s done. You move on. It’s the beauty of football. Everything comes to an end‚” Mosimane said.

Sundowns have not won a match‚ or scored‚ since their 2-0 MTN8 victory at home against Lamontville Golden Arrows on August 11.

The Brazilians go into Sunday’s MTN8 second leg semifinal against Cape Town City (kickoff 3pm) on the back foot after a 1-0 defeat at Cape Town Stadium last week.

The consequences of losing Billiat‚ Castro‚ Percy Tau and Keagan Dolly‚ who left for French club Montpellier‚ in a space of just over a year are starting to show with Sundowns failing to score in their previous four matches in all competition.

Downs have been struck by the departures in the past year-and-a half of Dolly; Tau this off-season to Brighton; and Billiat‚ in June‚ and Castro‚ in January‚ both defecting to Chiefs. Mosimane admits Sundowns have had a difficult time finding the target following these blows.

“Yeah it’s not easy hey. You can see I’m struggling to get it right but with time I will get it right – you know.

“It’s the same thing that Barcelona will tell you when they had your Neymar‚ [Luis] Suarez and [Lionel] Messi‚” Mosimane said.

“I’ll find the combination. That’s not easy. The challenge is we don’t train for me to put it together. That is my job as a coach – to find that combination. So it’s okay we’ll do that.”

Sundowns crashed out of the Champions League on Tuesday after they were held to a goalless draw in Atteridgeville by unfancied Guinea outfit Horoya where a win by any margin would have been enough to reach the quarterfinals.

Mosimane said the elimination from the premier continental club competition will rev his team up to do well in the MTN8‚ a cup that has eluded the former Bafana Bafana coach in his five seasons he has been at Chloorkop.

“It’s very important for us to focus on the cup now that we are out of the Champions League‚” the coach said.

“So we’ve got a chance now to prepare and plan properly. Hopefully we do well on Sunday. I know we’re on the back foot but it’s okay. It’s football.”