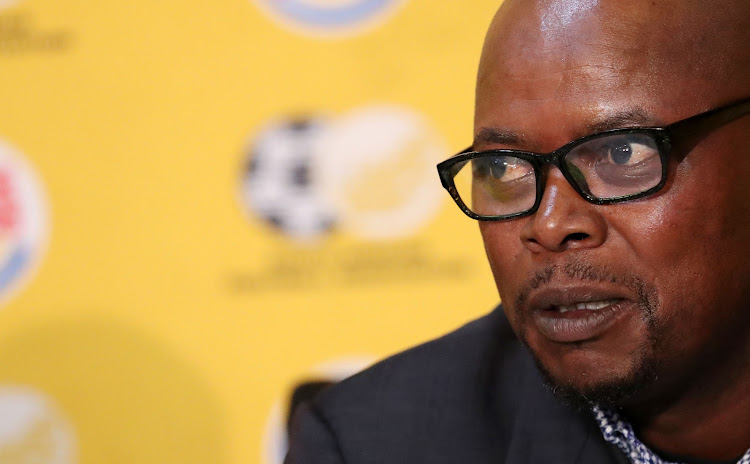 Pirates’ marksman tossed his jersey at supporters in the stands and stormed off the field in the 34th minute as his love-hate relationship with Bucs’ fans reached a climax in a 2-1 Absa Premiership win to his team against Black Leopards.

Masinga‚ who himself faced a lot of booing when he struggled with form and finding the back of the net playing for the national team‚ feels Gabuza (31) could have handled the situation better.

“You’re playing for a team like Pirates. It doesn’t matter whether it is Pirates or a smaller club‚ you’ll be criticised as a player. You just have to take it and work on your game‚” Masinga advised.

“The only way of shutting up supporters is to do the right thing. Score a goal or two and go celebrate with your teammates.

“I’m not condoning what the supporters were doing. The supporters’ conduct automatically affects the player’s morale and performance.

“The lack of confidence that Gabuza has was partly caused by those who were booing him.

“But Gabuza’s reaction to all of this was uncalled for. He was not supposed to do that‚ provoking fans. What if they also reacted in other ways?”

Gabuza’s reaction was long coming and he has previously produced some of the antics he did at the Peter Mokaba Stadium‚ although he had never previously run off the pitch like he did on Tuesday night.

The striker‚ who has scored eight league goals 58 matches in the past four seasons‚ is known for his short fuse and celebrating his rare goals by going to the supporters‚ touching his ears‚ trying to prove a point to the boo boys.

Gabuza’s reaction on Tuesday was a first of its kind in the local game. The striker only returned form the change rooms in the 51st minute heavily strapped and limping‚ even though he had walked off unhindered. He was promptly double-booked and dismissed by referee Thando Ndzandzeka.

Masinga offered advice on how players should try to manage their emotions when the supporters react to their poor performances.

“In my days I had my teammates who were very supportive to me‚ and the coaches were always there to offer some comfort. It’s not easy but it is a big part of the game and as a professional you’re expected to be able handle it somehow‚” he said.

“When I scored the goals I would have my teammates running to me‚ showing everyone that they were behind me no matter what.”

Going forward Masinga foresees Gabuza’s relationship with the supporters getting worse or even more strained if he does not tone down on his reaction.

“I think it’s going to be a difficult one. He must learn to handle his temper or get some people to help him‚” said the legendary Bafana striker.

“I don’t know how they [Pirates and the PSL] will handle it but in some teams in Europe this will be a huge scandal and the player will be punished severely for it.”

The Premier Soccer League (PSL) and Orlando Pirates will both await the reports form the match commissioner and Bucs’ technical team before deciding ...
Sport
3 years ago

Thamsanqa Gabuza's rude celebration gesture towards the Orlando Pirates fans at the Peter Mokaba Stadium in Polokwane on Tuesday has been met with ...
Sport
3 years ago

Orlando Pirates edged Black Leopards 2-1 in Tuesday night's action-packed Absa Premiersghip game at Peter Mokaba Stadium that had it all - the good, ...
Sport
3 years ago
Next Article