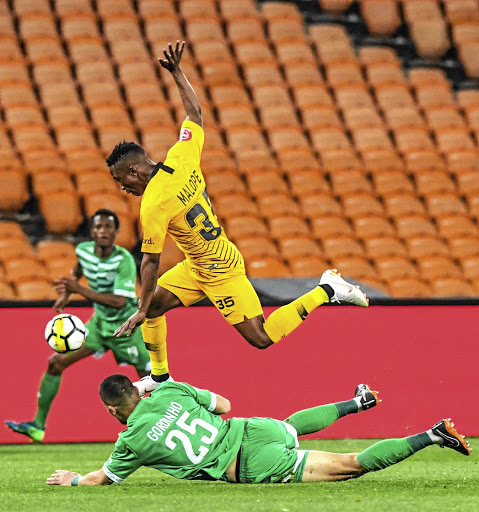 Kaizer Chiefs surrendered a two-goal advantage on Wednesday night to draw 2-2 with Bloemfontein Celtic as they failed to secure their first PSL victory of the season, suffering a fourth draw in five league outings.

When Khama Billiat and Khotso Malope struck in either half, Chiefs would have thought that it was the day for their first league win this term, but Ndumiso Mabena's 79th minute strike spoiled the party for the Soweto heavyweights.

Menzi Masuku had pulled one back for the visitors three minutes before Mabena's equaliser. Both Celtic goals were a result of lapse of concentration in Chiefs defence.

Malope was another player to start his maiden match this term, replacing Bhongolwethu Jayiya from the previous match.

Celtic should have taken the lead as early as the 7th minute but striker Tshegofatso Mabaso blasted his effort over the bar. That moment somehow inspired the home side to step up the gear, starting to dictate terms with Siphesihle Ntshangase, Billiat and Dumisani Zuma playing threatening passes in the final third.

This fluidity paid off when Billiat took on the likes of Lorenzo Gordinho and Alfred Ndengane before beating Patrick Tignyemb.

Returning to this stadium for the first time since leaving Chiefs last April, Celtic coach Steve Komphela made two quick substitutions in the second half after seeing that the home side were domineering. He brought in Menzi Masuku and Lucky Baloyi for Tebogo Potsane and Mabasa.

These changes proved catalyst for Celtic to salvage the draw as Masuku pulled one back before Mabena ensured they are unbeaten in the league going into Fifa break.