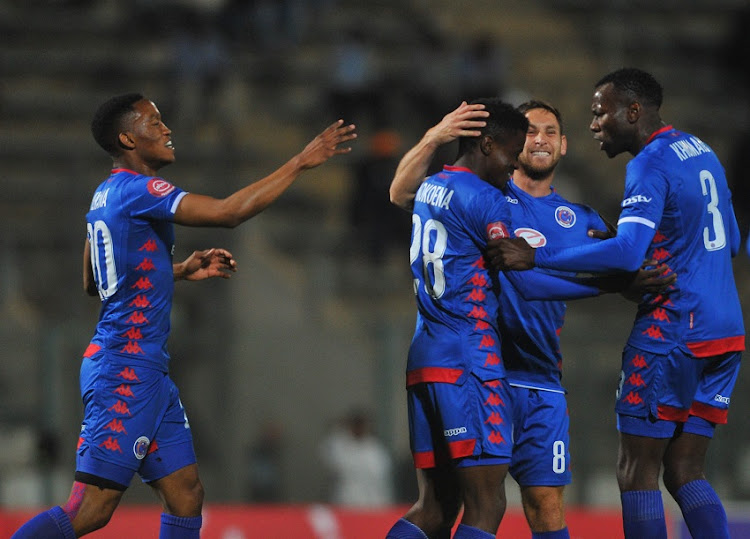 Teboho Mokoena of Supersport United celebrates a goal with teammates during the Absa Premiership match between Supersport United and Chippa United on the 29 August 2018 at Lucas Moripe Stadium.
Image: Sydney Mahlangu/BackpagePix

SuperSport United moved to third spot on the Absa Premiership standings after a largely uninspiring 2-1 win over struggling Chippa United in Atteridgeville on Wednesday night.

Goals in the first half by midfielder Teboho Mokoena and striker Evans Rusike helped Matsatsantsa to register their third win of the season after four starts and they have nine points to show for their troubles under coach Kaitano Tembo.

For Chippa, its back to the drawing board as they remain rooted at the foot of the table with only one point from a possible twelve and new coach Eric Tinkler is faced with a mountain to climb to get their campaign back on track.

So far, Chippa, who fired former coach Dan Malesela after only three matches, have lost three and drawn one of their opening four matches in the league and even more worrying for Tinkler is that they have leaked in seven goals.

Tinkler, who only joined Chippa last week, will take comfort from the fact their next league is only after the Fifa international week against Baroka FC at home and that will give him time to work on some of their deficiencies.

For Tembo, there is no time rest this week as he must prepare for the highly anticipated MTN8 semi-final clash against Kaizer Chiefs at FNB Stadium on Saturday which is sitting delicately on 2-2 after the first leg last weekend.

SuperSport’s next league match is against is a potential blockbuster against Orlando Pirates in Johannesburg 15 September.

United took the lead in the 16th minute through midfielder Mokoena whose shot found its way through the congested Chippa defence after he received a cross from Aubrey Modiba.

In the 27th minute, Chippa equalized through captain Mark Mayambela whose clever chip that was intended for Kurt Lentjies evaded everyone into the empty net of SuperSport United goalkeeper Ronwen Williams.

Lentjies missed a golden opportunity to give Chippa the lead after he managed to break the SuperSport off-side trap after 37 minutes but failed to connect properly with the ball with only Williams to beat.

United retook the lead from the boot of Rusike who beat Chippa goalkeeper on second attempt after he managed to take a clever turn inside the box following the arrival of a cross from Grant Kekana four minutes after Lentjies let them off the hook.

There were no goals to celebrate in the second half as United claimed three vital points at home and much needed morale booster for their trip to Chiefs in Johannesburg on Saturday where they will be looking to make it into the MTN8 final for the second season in succession.