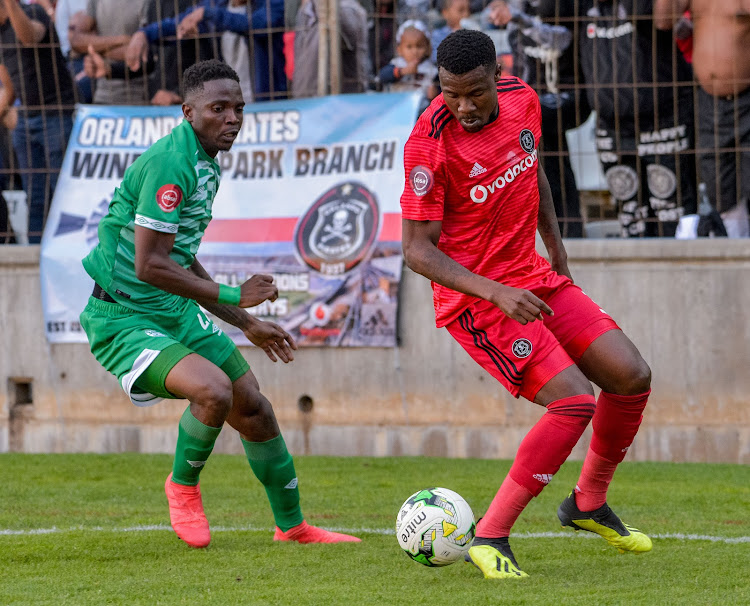 The Premier Soccer League (PSL) and Orlando Pirates will both await the reports from the match commissioner and Bucs’ technical team before deciding whether Thamsanqa Gabuza should be a subject of further censure.

Gabuza appeared to storm off the field after setting up‚ with his cross‚ Pirates’ opener from Thivhavhudzi Ndou’s own goal in the 34th minute of Bucs’ 2-1 Absa Premiership victory against Black Leopards at Peter Mokaba Stadium on Tuesday night.

The much-maligned centre-forward had missed a string of chances and had his own team’s supporters on his back.

After setting up Ndou’s own goal Gabuza appeared to have a rush of blood‚ storming towards Bucs’ supporters behind his team’s dugout and throwing his shirt at them.

Pirates coach Milutin Sredoejevic angrily pushed Gabuza back‚ but the big striker then walked towards the tunnel and continued to the change rooms despite team-mates trying in vain to call him back.

When Gabuza finally returned 17 minutes into the game later‚ in the 51st‚ he had his leg heavily strapped and was limping.

Referee Thando Ndzandzeka was having none of it‚ and produced two yellow cards‚ resulting in the player’s automatic dismissal.

The delayed yellows appeared to be for Gabuza taking off his shirt and throwing it at the crowd‚ and for unsportsmanlike behaviour.

The big striker may face further action such as a fine or added suspension from his club or the league.

PSL communications manager Luxolo September said the league would have to await the match commissioner’s report before deciding if a disciplinary hearing was necessary.

“What would people want us to do? Because I think the referee dealt with the matter‚” September said.

“But look‚ we’ll obviously look at what the match commissioner had to say and decide if there should be more action taken against the player.”

Asked if there might not be a ‘bringing the game into disrepute’ issue‚ September said: “As I say‚ from us as a league we will read what the match commissioner’s report said. And until then there is nothing really we can say about it.”

Pirates’ administrative officer Floyd Mbele said the club could not say if any further action was necessary from their part until the team returned to Johannesburg on Wednesday afternoon.

Mbele was asked if the circumstances of Gabuza walking off unhindered‚ but returning heavily strapped and limping‚ and still being double booked and sent off by Nzandzeka‚ might warrant further investigation by Pirates.

“It’s 11am in the morning. The team haven’t returned from Polokwane yet. I can’t be talking about something that happened at 9pm last night‚” Mbele said.

“I think give us the space and chance for the team to at least get back to the office‚ and then have a reflection.

“We will await those reports. It’s a process. Everybody must at least give the team a chance to sit and decide what we will do going forward.”

Gabuza appeared to come out fired-up to prove his detractors wrong after having Bucs’ supporters’ anger directed at him several times this season.

The big striker’s bustling contribution to Pirates is often over-shadowed by his lack of goals.

Mulamu said the soccer boss contacted the police to make them aware of the suspects posing as Hawks officials.
News
2 years ago

Free State Stars coach Luc Eymael has been charged by the Premier Soccer League for failing to attend a post-match interview at in an Absa ...
Sport
2 years ago
Next Article