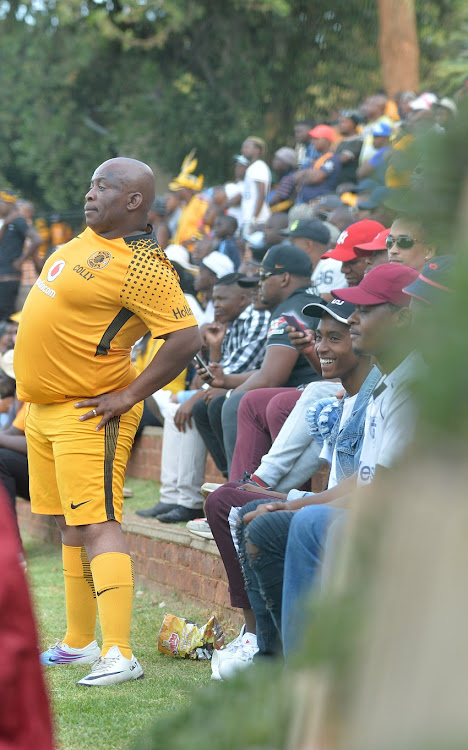 When Kaizer Chiefs’ now-famous supporter “Colly” is not entertaining his fellow fans with his hilarious full-kit warmup routine at matches he is out busting criminals.

That is because Colly‚ full name Colraine Moatshe‚ is a police sergeant in Johannesburg.

Originally from Rustenburg‚ and a truck driver until 2002‚ now Moatshe lives in Norwood‚ Johannesburg‚ and is a sergeant at the Linden SA Police Service station.

“I always wanted to be a policeman. I enjoy serving people.

“Being a policeman comes with a lot of challenges.

"If Chiefs are playing‚ I come to the stadium just to come and relax.”

SowetanLIVE approached Moatshe at half time of Chiefs’ 1-0 Absa Premiership win against Cape Town City at FNB Stadium on Saturday night to find out more about this madcap Amakhosi supporter who comes to games in full kit.

Moatshe entertains crowds and TV audiences with his warmups up and down the aisles.

“My wife and kids support Kaizer Chiefs‚” he said.

“I bought my kids Chiefs jerseys from before they could even see.

"When they opened their eyes‚ a Chiefs jersey was the first thing they saw.

“They do all come to the stadium with me sometimes.

"When they do I don’t do my routine – I just sit still and watch. My kids are still small.”

Moatshe (41) began his routine at a Chiefs-Platinum Stars 0-0 draw at FNB Stadium in October 2010.

“My routine started when one of the Kaizer Chiefs players got injured.

“I stood up as if I wanted to substitute him. I started doing some warmups and I saw that the supporters liked it.

They started cheering: ‘Colly‚ Colly‚ Colly’‚ because of the name on my jersey’.”

Moatshe had started coming in full kit to matches because: “You know‚ when Chiefs are playing I would like to look like the players.”

“I don’t take it as being famous. I take it as entertaining supporters and at the same time keeping my team going.” Moatshe has supported Chiefs from when he was a toddler.

“When I was small‚ my uncle in Rustenburg showed me a picture at his house of the Teenage Dladlas‚ Ace Ntsoelengoes and Bala’cs.

“I was staring at the picture‚ and I liked it. And he said to me‚ ‘From now on this is your team’.

“I started going to matches at Odi Stadium.

"My first ever game was Chiefs versus Mamelodi Sundowns there.

“Colly” knows his warmups bring smiles to Chiefs supporters’ faces‚ especially when the team are struggling.

He often starts his routine during lulls in games – as any respectable substitute would.

This will result in cheers and a lifting of the crowd‚ which can even have an affect on the players on the field.

“When I go up and down‚ and see how much the fans like it‚ it keeps me going up and down‚” he said.

“Because I think I’m also at the same time motivating the players.”

Does Colly have a special fitness regime to keep in shape for his routine?

“Not really‚” he laughed.

“I’m just doing it for the love of the game.”