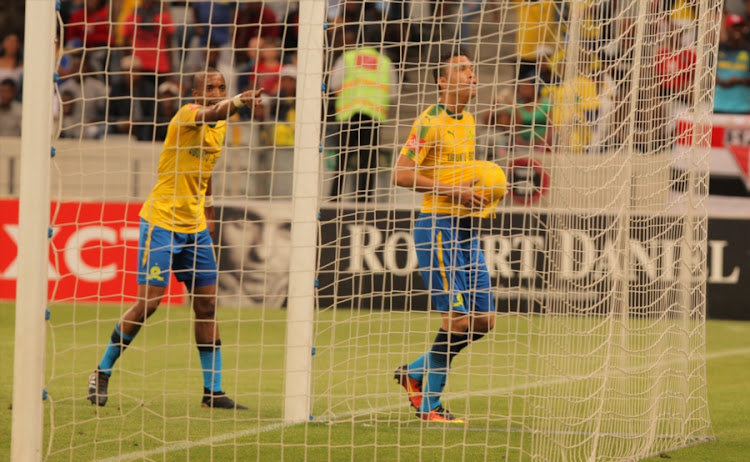 Mamelodi Sundowns have opened up a four-point lead at the top of the Premier Soccer League standings after they came from behind to beat relegation-threatened Ajax Cape Town 2-1 at the Cape Town Stadium on Tuesday.

The home side took the lead midway through the first half via Fagrie Lakay, his first for the club since a loan move from SuperSport United.

But two goals in a minute shortly afterwards from Ricardo Nascimento, via the penalty spot, and Sibusiso Vilakazi with his first league goal in 11 months, gave The Brazilians some breathing space at the top of the league.

They have now played the same number of games as second-placed Cape Town City, with their four-point advantage at the top of the table a true reflection of their position in the title race.

Ajax remain second-bottom of the league with 13 points from their 16 games.

Sundowns are next in action at home to Orlando Pirates on Saturday, while Ajax host Platinum Stars in a crunch relegation battle on Friday night.

Sundowns coach Pitso Mosimane made two changes from the side that was beaten 3-2 at Polokwane City in their previous game, replacing Anele Ngcongca with Thapelo Morena, and bringing in Vilakazi in the place of George Lebese.

Ajax handed a debut to former Sundowns midfielder Samuel Julies, one of four changes from their weekend defeat to Maritzburg United that also saw Sirgio Kammies, Isaac Nhlapo and Rodrick Kabwe brought into the side.

Sundowns applied all the early pressure, but battled to create clear-cut chances as Ajax got plenty of men behind the ball.

The home side looked to catch Sundowns on the break and almost succeeded when Lakay got in behind Morena, but his shot on the run from the edge of the box was easy for Dennis Onyango in the visitors’ goal.

Some quick thinking led to them opening the scoring on 27 minutes though.

Tashreeq Morris took a quick free-kick after being fouled and Lakay outmuscled Madisha, before shooting low past Onyango into the opposite corner.

There was some doubt as to whether the ball was stationary when Morris played it, but referee Daniel Bennett allowed the goal.

Sundowns kept on applying the pressure though and it seemed only a matter of time before they broke through. Four minutes in fact.

Lakay gave the ball away on the edge of the Sundowns box and a flowing move eventually saw Percy Tau feed to the left, from where the cross was adjudged to have been handled by Nhlapo.

Nascimento was his usual cool self from the spot and buried the resultant penalty in the bottom corner.

Sundowns had their tails up now and having conceded twice in a minute against Polokwane at the weekend, now scored two goals themselves in that same amount of time.

Tebogo Langerman’s cross was turned home by Vilakazi from close-range.

Ajax made a change at the break, handing a debut to Zimbabwean midfielder Gerald Takwara in the place of Zambian Rodrick Kabwe.

A mix-up in the Sundowns defence allowed Morris a shot from close-range, and after Onyango could only parry it, Lakay shot wildly over when he really should have buried the chance.

Tau showed some brilliant skill to leave Mario Booysen for dead in the box, but his finish didn’t quite match as he scooped the ball wide with just Brandon Petersen in the Ajax goal to beat.

Mosimane then handed a debut to national Under-20 striker Keletso Makgalwa, who was promoted to the first team at the start of the season but has had to wait his chance.

A number of January recruits made fine starts at their new Premier Soccer League sides this past weekend‚ suggesting some good buys and shrewd ...
Sport
4 years ago

Steven Pienaar has the technique and experience to contribute to one of the Premier Soccer League’s big teams.
Sport
4 years ago

Top five most memorable games of 2017

The Premier Soccer League has been tight and tense this season‚ with fewer goals than in previous seasons‚ but especially in the first half of the ...
Sport
4 years ago
Next Article