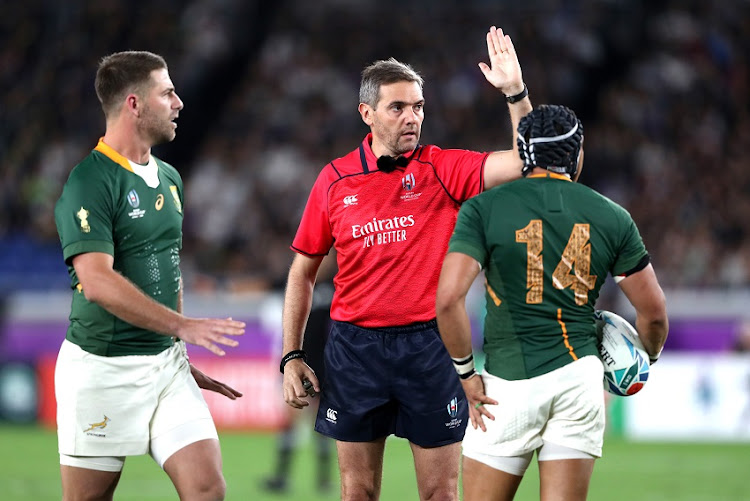 There will finally be a French Connection in the Rugby World Cup final after Pau born Jérome Garcès was confirmed as the man in the middle for Saturday’s decider between South Africa and England.

Much like the lead character ‘Popeye’ Doyle from the crime caper from the early 1970s‚ Garcès goes in relentless pursuit of lawbreakers‚ often to the chagrin of those on the stands who want to see matches decidedly along less technical lines.

He seems to take glee in punishing teams but gets equally animated when he indicates for play to ‘go on’.

South Africans‚ in particular‚ have taken issue with Garcès who has officiated in 15 Tests with the Springboks victorious only five occasions.

Significantly‚ however‚ the Frenchman was in charge in their semifinal when they beat Wales in a hard-earned 19-16 win last Sunday.

He also officiated South Africa’s opening match at this World Cup against the All Blacks in Yokohama. The Boks lost that match 23-13.

If South Africans' stance towards Garcès softened last week‚ full redemption will be on offer this weekend should the Springboks beat England in the final Yokohama.

The only time Garcès officiated a match between South Africa and England was in November 2016 when the Springboks lost 37-21 at Twickenham.

“He traditionally is a good ref.

"He is not one-sided at all‚” said scrumhalf Faf de Klerk.

“We can learn from this weekend especially that first game‚ as well about how he sees things.

"How he officiates scrums and mauling‚ stuff like that. As players we should try and get into his head as quickly as possible to see how he wants the game to go to make sure we don’t get on his wrong side.

“It is going to be a massive contest‚ we should just let him do his thing. If we let the ref do his ref the game should flow nicely‚” said De Klerk.

Garcès will become the first Frenchman to officiate a final‚ but that partly also has to do with the fact that France have played in three of the eight World Cup finals.

Fact is‚ Garcès  is one of the world’s most experienced referees with 55 Tests under his belt.

“I am honoured and delighted to be appointed to referee the Rugby World Cup 2019 final‚” said Garcès.

“It is a dream as a referee‚ but this is a team sport‚ and as a team of four‚ we will be out there to do the best for the teams‚ the fans‚ the sport‚ but also the entire match officials team‚ selectors and support team‚ who have worked so hard over the last four years‚ culminating in Rugby World Cup 2019.”

England's Wayne Barnes will take charge of the bronze final – as he did at Rugby World Cup 2011 – between New Zealand and Wales at Tokyo Stadium on Friday.

It will be his 90th Test match as a referee and his 21st at Rugby World Cup.

South Africa’s Jaco Peyper and Pascal Gaüzère (France) will be his assistants‚ while another South African‚ Marius Jonker will be the TMO.

World Rugby said in a statement the appointments were made after a comprehensive review of the weekend’s semi-finals by the World Rugby match officials selection committee comprising Chairman Anthony Buchanan‚ Joel Jutge‚ Lyndon Bray‚ Nick Mallett and Alain Rolland.