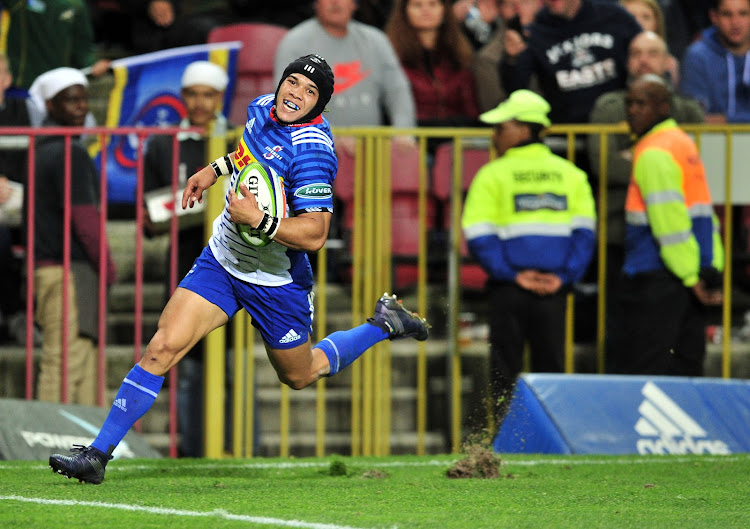 Cheslin Kolbe of the DHL Stormers scores a try during the Super Rugby match against the Sunwolves at Newlands Rugby Stadium, Cape Town on July 8 2017.
Image: Ryan Wilkisky/BackpagePix

Springbok coach Rassie Erasmus has made a bold and popular call by bringing in French-Based utility back Cheslin Kolbe for the Rugby Championship tour to Australia and New Zealand.

The diminutive Kolbe has been dazzling in the French Top 14 for Toulouse over the past 12 months and could finally make his Springbok debut after years of missing out.

Veteran hooker Schalk Brits has also been included at the expense of Akker van der Merwe as Erasmus gave an indication that he is looking for experienced players with X factor to plug some gaps. Brits featured in the third Test against England in Cape Town.

In all Erasmus added six players to the squad that returned on Tuesday from Argentina. They are the 24-year-old Kolbe‚ Jesse Kriel and Damian de Allende (both centres)‚ Ross Cronje (scrumhalf)‚ Brits (hooker) and Sikhumbuzo Notshe (loose forward).

Kolbe‚ a former Junior Springbok fullback who was a non-playing member of the 2016 Springbok tour squad to Europe‚ has established himself as a key backline player for Toulouse since joining the French club from Western Province. He is equally at home out wide on the wing.

According to Erasmus‚ the new additions give the squad added experience in some areas while also providing him the chance to continue building squad depth for next year’s Rugby World Cup.

De Allende has shrugged off his injury while Cronje‚ a regular in the Bok starting lineup last year‚ comes into the squad in a straight rotational switch with Ivan van Zyl‚ who will be able to get some game time with his province in the Currie Cup.

“Cheslin has certainly grabbed his opportunities for his French club and he has earned his spot in the squad. He is in good form and we are delighted have him in the group‚” said Erasmus.

“Damian was close to full fitness during our recent training camp‚ while Ross‚ Jesse and Notshe got some valuable game time while playing for their provinces in the Currie Cup last weekend.”

De Allende and Wilco Louw have been released to play in the Currie Cup for Western Province on Friday evening and will link up with the squad before their departure from Johannesburg on Saturday.

The other players who had been training with the squad but will not travel Down Under – Van Zyl‚ Lwazi Mvovo‚ Lionel Mapoe‚ Marvin Orie and Van der Merwe – are also released back to their respective provinces.

“We would like to ensure these players remain match fit and the Currie Cup is the ideal place for them to ensure they don’t get rusty‚ which is why we decided it would be in their best interest to return to their provinces so that they can be considered for selection‚” explained Erasmus.

The Bok squad will assemble on Saturday in Johannesburg and they fly out to Brisbane later on the same day.

Kevin de Klerk’s long and distinguished association with the Lions has come to an end.
Sport
3 years ago
Next Article