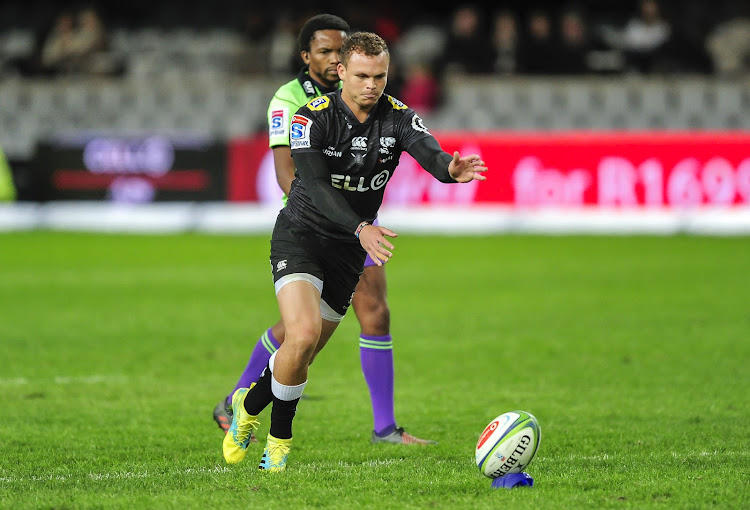 In the midst of the vicious debates around the incumbency of the Springbok flyhalf berth‚ Curwin Bosch’s name has all but disappeared from this conversation.

A lot of it has to do with selectorial decisions that are beyond the talented 21-year-old’s control.

The fact that Bosch is multi-skilled and hugely talented is not in doubt but he finds himself in a difficult position of playing for a team whose coach‚ Robert du Preez‚ has a namesake son who plays flyhalf.

Whether that’s a clearly thought-out rugby decision that will be beneficial for the game in South African in the long run remains to be seen but Bosch’s posting to fullback removes him from the flyhalf debate in the interim.

Being out of the spotlight has perhaps been a blessing for Bosch‚ who said he’s starting to find the fun that’s been missing from his game.

His focus remains ensuring that the Sharks right the wrongs of last year’s final loss against Western Province.

“All of us want to play for the Springboks but the most important thing for me now is for the Sharks to do well in the Currie Cup and me just enjoying my rugby‚” Bosch said.

“I play my best rugby when I’m enjoying it. I think I lost a bit of that towards the end of the Super Rugby campaign. The big emphasis on myself is to enjoy my rugby again.”

Signs of Bosch enjoying his rugby again were evident in the Sharks’ 26-10 win against the Bulls at King’s Park on Saturday afternoon.

Bosch’s tactical sharpness led the way for the Sharks at the back but there’s the arrival of another Eastern Cape starlet in Aphelele Fassi.

Like Bosch‚ Fassi was an accomplished inside back at Dale College in King William’s Town but the move to senior rugby has seen him make a name for himself at wing.

His inclusion not only helps the Sharks from a depth perspective‚ but his experience and excitement as a fullback/flyhalf could also come in handy should the likes of Du Preez and Bosch disappear due to injuries and Springbok call-ups.

Bosch’s focus has now moved to the Currie Cup clash the Sharks have against the Free State Cheetahs in Bloemfontein on Saturday but he also marvelled at the talent that is Fassi.

“There’s always the potential of the Cheetahs fielding a weakened side against us and we’re well aware of that‚” Bosch said.

“Aphelele is a great rugby player judging from what we’ve seen in the SuperSport Rugby Challenge and the great touches he had in the Blue Bulls game. He’s definitely a player for the future at the Sharks.

“He can learn a lot from the players he has around him like Lwazi Mvovo. It’s still exciting for me to play around guys like Lwazi and still learn from them.”

Western Province tighthead prop Michael Kumbirai would like to make the least glamorous position on the field ‘cool’ during the 2018 Currie Cup ...
Sport
3 years ago

Tepid Springboks go down to Argentina in Mendoza

The honeymoon is over for Springboks coach Rassie Erasmus after they lost 32-19 to Argentina in their Rugby Championship clash in Mendoza.
Sport
3 years ago
Next Article