Tepid Springboks go down to Argentina in Mendoza 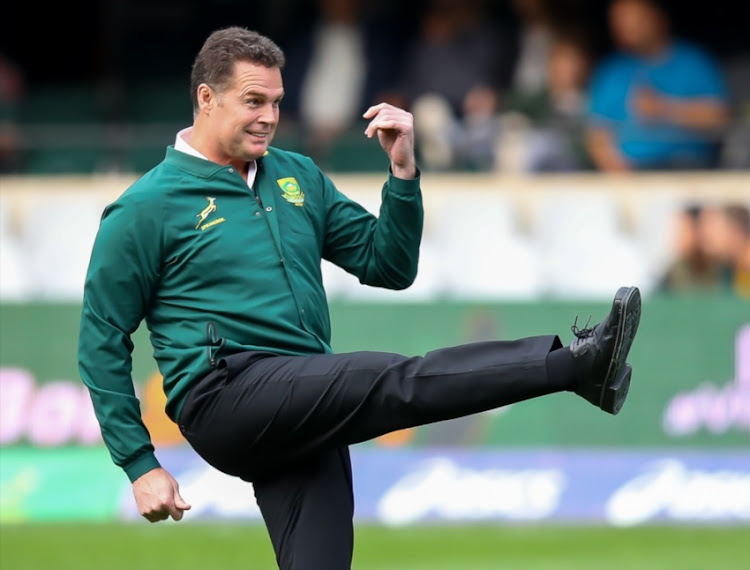 Springbok coach Rassie Erasmus dropping for goal in the warm up session during the Rugby Championship match between South Africa and Argentina at Jonsson Kings Park on August 18, 2018 in Durban, South Africa.
Image: Gordon Arons/Gallo Images

The honeymoon is over for Springboks coach Rassie Erasmus after they lost 32-19 to Argentina in their Rugby Championship clash in Mendoza.

Erasmus, who started his Boks coaching tenure with the 2-1 series win over England and the much publicised appointment of Siya Kolisi as the country’s first black African captain, has reached the stage where he must negotiate through the complexities of competing consistently at this level.

The Springboks managed to beat the Pumas in Durban last weekend but they came short of registering a double over this Argentina side who proved to be stubborn on their own conditions in Mendoza.

It does not get any easier for the Springboks as they have two highly demanding fixtures against Australia in Brisbane on September 8 and the all conquering New Zealand a week later in Wellington where they will be looking to stay alive in the competition.

Erasmus and his technical team, skipper Kolisi and the rest of the leadership group, they must find ways of motivating the players as they have suffered their first loss of the competition and winning in Australia and New Zealand is not going to be easy.

Besides Lionel Mapoe, who scored a brace of tries, and Kolisi, who scored the other, there were not many positives to speak about with regards to the Boks while Argentina were driven to this important home victory by the a collective team effort.

Nicolas Sanchez scored 17 points and a try in the game and Bautista Delguy contributed immensely with two tries and the rest of the team put their shoulders on the wheel.

Argentina were the first to put their name on the scores board after four minutes from the reliable boot of pivot Nicolas Sanchez after Frans Malherbe was penalized for holding on to the ball.

Springboks got the opportunity to level matters a few minutes later but Handrè Pollard started his kicking duties on a poor note when he could not find the middle of the poles from a good position as his kicking woes continued from last weekend’s win in Durban.

The Boks went on to score the first try of the match through Kolisi who evaded a few tackles on his way to crossing the line and Pollard correct his earlier mistake by converting as South Africa took a slender four points lead.

The hosts were not dispirited and in a space of five minutes shortly after Kolisi had touched down, they responded in style with two quick tries by lock Bautista Delguy that were converted by Sanchez as they increased their lead to ten points.

If this was enough, South Africa lost influential Eben Etzebeth, who had a storming game in Durban last weekend, to the sin bin for a professional foul after 25 minutes and Argentina used their numerical advantage to good effect immediately with Sanchez registering a try of his own.

At this point of the match, the Springboks looked out of sorts as Argentina dictated terms and Sanchez further increased their lead by 20 points with a well-taken drop goal in the 36th minute after he received the ball from Gonzalo Bertranou.

To his credit, Sanchez was the star performer for the home side as he scored a total of seventeen points for the Pumas who went to the half time break with a deserved lead of 27-7 and the Springboks faced with a mountain to climb to claw their way back in the game.

The Pumas continued the second half in the same way as they impressed before the break and further increased their lead through Ramiro Moyano who got the better of the South African defence but Sanchez missed with his conversion after 46 minutes.

South Africa reduced the score board deficit with a powerful try by Mapoe that was converted by Pollard but they still trailed Argentina by eighteen points with 30 minutes remaining in the game.

After the hour mark, Mapoe registered his second international try but Pollard’s conversion hot the poles.

The return of Franco Mostert to the Springbok second row for Saturday’s Rugby Championship clash against Argentina in Mendoza should help repair a ...
Sport
3 years ago

Western Province coped better with atrocious conditions that called for wetsuits and goggles, rather than boots and rugby jerseys, to beat the Free ...
Sport
3 years ago

The ghosts of last year's Currie Cup final home defeat may not be exorcised yet but the Sharks laid down a solid domestic marker with their 26-10 ...
Sport
3 years ago
Next Article