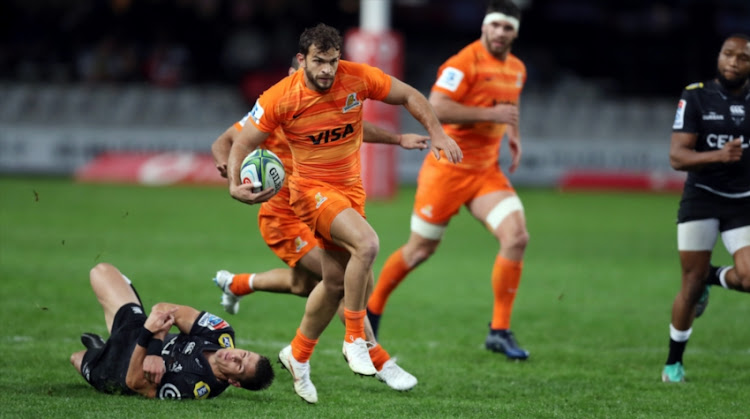 Louis Schreuder of the Cell C Sharks looks to tackle Ramiro Moyano of the Jaguares during the Super Rugby match between Cell C Sharks and Jaguares at Jonsson Kings Park on July 14, 2018 in Durban, South Africa.
Image: Steve Haag/Gallo Images

Western Province are wary of the wounded Free State Cheetahs before the Currie Cup clash at Newlands on Saturday.

The Cheetahs fell 34-12 in round one to the Blue Bulls in Bloemfontein last weekend at and are smarting at the indignity. Given that there is only a single round of matches this season‚ losing at home was a big blow foe the Free Staters.

WP have to start their campaign on a positive note in their own backyard‚ having enjoyed a bye in round one. The defending champions were on a short tour of France last week and learned some valuable lessons in a 26-7 loss to French club giants Montpellier.

The Currie Cup clash though‚ will have more intensity as a competitive match‚ and WP coach John Dobson won’t take the Cheetahs lightly despite their opening weekend setback.

Looking ahead to the Currie Cup campaign‚ Dobson acknowledged that the change of format and a new crop of players makes it a unique challenge if they are to retain their title and make it a record 35th Currie Cup victory.

“It is a much shorter format with a single round before the play-offs‚” Dobson said.

“We must also understand that this is not the team that won it in Durban last year.

“We expect 13 or 14 out of the 22 who played in the final last year not to be available for the final should we make it this year.

“So it is largely a new team‚ but we are very excited by the team and I think they have the potential to do retain the Currie Cup‚ but it is going to take some sacrifice and I thought we saw some encouraging signs against Montpellier.”

Cheetahs director of Rugby Franco Smith was left stunned by last week’s loss and knows his side has to turn it around in Cape Town.

It’s likely to be the last time they are at full strength in the Currie Cup with PRO 14 commitments starting soon.

“The biggest disappointment was the fact that it [losing to the Bulls] was a home game‚” Smith said.

“This means that we have to pick up points in an away game now‚ which will be very important.

“There is a lot of expectation around the team and we felt that. Before the Bulls game‚ the players were all very nervous and that is very unlike us.