Pumas not rattled as Boks prepare for tough battle 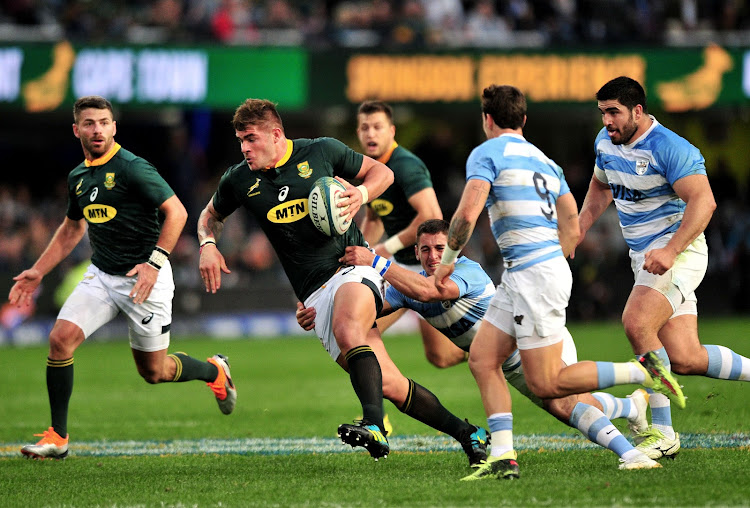 Malcolm Marx of the Springboks powers away from a tackle by Bautista Ezcurra during the The Rugby Championship match between South Africa and Argentina at Kings Park Stadium, Durban on August 18 2018.
Image: Samuel Shivambu/BackpagePix

The Pumas made only one change to their starting lineup for the return clash against the Springboks in Mendoza on Saturday‚ which indicates that they are far from rattled.

Despite losing the Rugby Championship opener 34-21 to the Boks in Durban last week coach Mario Ledesma has remained calm. In comes lock Tomas Lavanini for Matias Alemanno in the only change in the starting XV.

Springbok coach Rassie Erasmus is wary of the Pumas‚ especially on home soil despite his side scoring six tries last week.

Although the Bok lineout stuttered last week‚ losing four throws‚ Erasmus is more concerned with the breakdown threat that the Pumas pose.

Hooker Agustin Creevy is like an extra looseforward and is often in the mix in the battle for the ball on the deck‚ much like Bok counterpart Malcolm Marx.

“They [the Pumas] are dangerous all over the field‚” Erasmus said. “Creevy and all three of their loose forwards are wonderful at the breakdown and as ball carriers‚ they have fast wingers and an attacking centre.”

Marx‚ who gave another impressive display in the loose exchanges last week‚ will be under pressure in the set piece after failing to connect with his jumpers on four occasions last week.

Mostert’s return will hopefully add cohesion to the lineout as the pair play for the Lions‚ but Marx will still have a massive job to do in the battle for the ball on the deck.

“A team can change many things – attack‚ defence‚ breakdown and set piece – from one game to the next‚ but here in Argentina it is much more emotional‚” Marx said.

“We are focusing on ourselves so we can be better. Creevy is a smart player‚ who knows the ins and outs‚ and so we will have to watch him‚ but really it’s about playing our game.”

Prop Steven Kitshoff‚ who is developing a deserved reputation for changing matches positively when he comes on in the second half‚ was also expecting the scrum exchanges to be fierce.

“Coming from the bench you have to make an impact especially in the first few minutes to inject energy into the contest‚” Kitshoff said.

“It’s going to be a tough‚ physical battle. Argentina have always been one of the more physical packs to scrum against through the years and it’s no different now – it will always be a tactical‚ as well as physical battle in the scrum. We worked hard on our scrums this week and we’re up for it.”

The return of Franco Mostert to the Springbok second row for Saturday’s Rugby Championship clash against Argentina in Mendoza should help repair a ...
Sport
3 years ago

The Springboks arrived in Buenos Aires on Tuesday expecting a backlash from the Pumas for their Rugby Championship return match in Mendoza this ...
Sport
3 years ago
Next Article