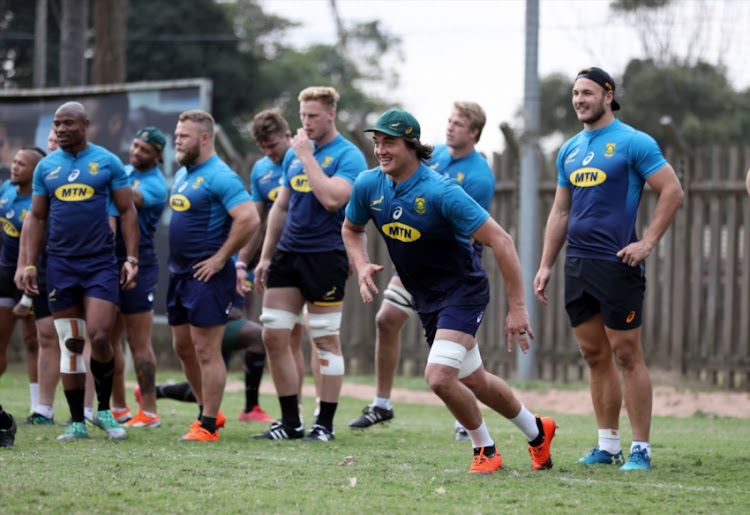 The return of Franco Mostert to the Springbok second row for Saturday’s Rugby Championship clash against Argentina in Mendoza should help repair a misfiring lineout.

The Springboks’ set piece was uncharacteristically sloppy during last week’s 34-21 win over the Pumas in Durban and Mostert is the only change to the starting lineup from last week.

Hooker Malcolm Marx‚ who plays for the Lions‚ battled to connect with primary jumpers Pieter-Steph du Toit and Eben Etzebeth‚ both of the Stormers.

Mostert comes with heaps of experience combining with Marx at Super Rugby level and should help steady that aspect of the game especially as the Pumas will have sensed weakness and look to add more pressure in the lineout.

Marx is a wonderful player and offers the Boks so much around the park both on attack and defence‚ but his throwing can sometimes resemble a golfer with a case of the yips when there is pressure.

The Boks lost four lineouts last week‚ three where Marx failed to connect with his jumpers and one that the Pumas poached.

Marx shouldered the blame for the mistakes in an interview after the match although coach Rassie Erasmus didn’t lay the blame squarely on his broad shoulders.

The coach indicated that there were system errors‚ which‚ translated‚ means the jumpers and the thrower weren’t always on the same wavelength.

Communication between Mostert and Marx will be much more organic after playing together for so long and will help cement an area of the game that can lead to a rapid downward spiral in other aspects when it goes wrong.

Mostert also brings a high work rate (not that Du Toit is a slouch in that department)‚ and is well rested after a two-week break since the Super Rugby final.

He has an indefatigable appetite for work and with some impressive firepower off the bench there will be no respite for the Pumas.

With RG Snyman and Du Toit both among the reserves as well as tighthead Wilco Louw‚ prop Steven Kitshoff and hooker Bongi Mbonambi‚ the reserve forwards will ensure an increase in intensity in the final quarter.

Erasmus retained the same backline‚ which is understandable as they are still trying to gel.

With Willie le Roux and Faf de Klerk set to return to their English clubs before the end of the Rugby Championship‚ Erasmus wants to get as much out of them as possible in the games available while also finding a way to blood Embrose Papier and Damian Willemse from the bench. Both the youngsters were included among the reserves again.

Centres Andre Esterhuizen and Lukhanyo Am have another chance to combine. The former grew into the match last week and needs to back his bulk more often in contact situations.

Am just needs to keep controlling the defence and testing the opposition on attack like he did last week to establish beyond doubt that he is the answer at No.13.

One man who needs a good performance is flyhalf Handre Pollard‚ who missed five kicks at goal last week and was also mediocre in other aspects of his game. His distribution was a touch off but he is too classy to fail again.

Winning in Argentina won’t be easy but Erasmus has picked a squad that should have the beating of the Pumas if they control the set piece with Mostert back in the frame.