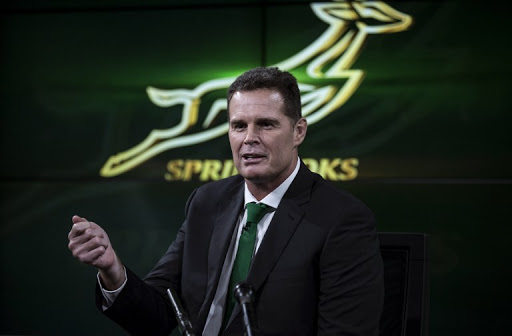 The Springboks arrived in Buenos Aires on Tuesday expecting a backlash from the Pumas for their Rugby Championship return match in Mendoza this weekend.

The Boks secured a tough 34-21 win over Argentina in Durban last Saturday‚ scoring six tries in the process after trailing 14-10 at halftime.

That may be so‚ but Argentina will grow an extra limb at home and the Boks will have to be as good as they were in the second half in Durban‚ for 80 minutes in Mendoza‚ to win again.

Bok coach Rassie Erasmus was under no illusions that the coming match will be a tougher Test than the clash at King’s Park‚ which was difficult enough.

This is only the second Test away from home under Erasmus and the first ended in a 22-20 defeat against Wales in Washington.

If the Boks want to become a world force in the game again they need to improve their away record in both the Rugby Championship and in general.

Since the 2015 World‚ the Boks have won only three of 14 away Tests in the past two-and-a-half seasons.

Their form in the Rugby Championship since 2012‚ when Argentina was included‚ is not much better with only four road wins in 16 games.

Erasmus though‚ has made it clear that while results remain a priority‚ his project of rebuilding the Boks is about creating depth‚ fostering a positive long-term culture and prioritising transformation in line with set targets.

That does not translate to accepting defeat‚ but his is also realistic enough to know that they are not suddenly going to start dominating away from home.

"It has always been tough there [in Argentina]‚” Erasmus said.

"We got five points out of this first game and we’re in the mix now‚ so if we go over there and scrape through a win then we’ll be in this Rugby Championship.

"As desperate as they’re going to be to try and turn it around‚ we’re as desperate to win."

The one team in the Rugby Championship that the Boks have enjoyed away success against is the Pumas‚ although it has never been an easy ride.

In five encounters in Argentina the Springboks have won three‚ drawn one and lost one against the Pumas with last year’s 41-23 win being the biggest margin. Their other two wins were by two and five points respectively.

This weekend‚ the Boks would happily take a one point win and move on.