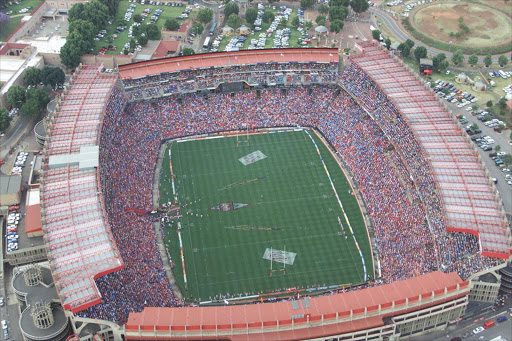 Ellis Park stadium, Johannesburg, from the air: the rugby Currie Cup final between the Bulls and the Lions - which the Bulls won 31-7.
Image: Bonile Bam. 27/10/2002. © Sunday Times

Less is definitely more for Sharks scrumhalf Louis Schreuder as the Sharks start their Currie Cup assault against the Blue Bulls at King's Park on Saturday.

While the Sharks had to busy themselves with a preparatory game against Bordeaux on Friday‚ the Bulls got their campaign going with an efficient 34-12 win against the Free State Cheetahs in Bloemfontein.

The single-round nature of this year's tournament means early slip-ups could be terminal in the long-run‚ something the Sharks will be looking to avoid this season.

In last year's double-round format‚ the Sharks lost their first game but went on a superb winning run that was snapped by eventual winners Western Province‚ who also went on to beat them in the final.

“A short tournament adds a bit of pressure because you know there's no room for errors and you can't make up for mistakes at the end of the tournament.

"We do feel that six rounds is good because Super Rugby does tend to be a bit long‚ especially when you go into play-offs and it does get a bit strenuous from a travelling perspective‚” Schreuder said.

“This will be very good for the Currie Cup because it'll give the people less rugby but more exciting rugby.”

Last season‚ the Sharks were the masters of not being able to time their form run to perfection but Schreuder said they have learnt their lesson.

What the Sharks did well last season was to win the majority of their home games even though they lost the one that mattered (the final).

But Schreuder said they have moved on from their shock 33-21 defeat against Western Province.

“We're not thinking much about last season because we have our own expectations and we can't think far ahead.

"We can't think semi-finals and finals. We have to get through the pool games and collect as many points as we can to proceed to the play-offs‚” Schreuder said.

“We've got our first home game and we can't afford to lose our home games.

"We have to start well and fortunately we had a game against Bordeaux.

"It was good that we had that game but it's going to be a massive challenge for us this weekend.”