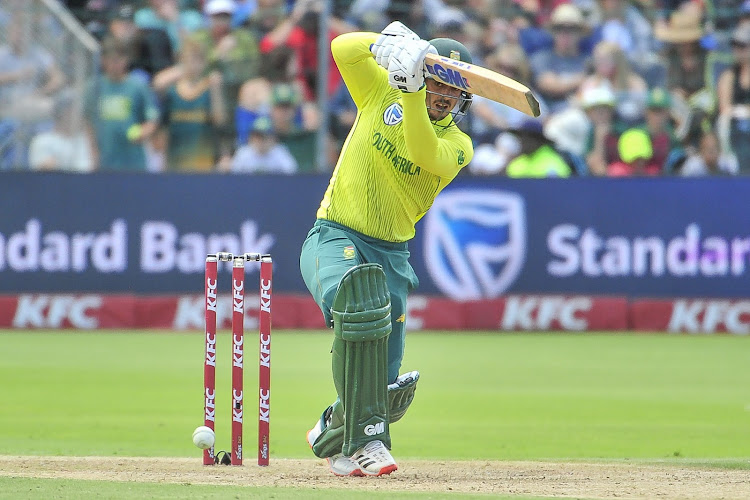 Quinton de Kock has had a baptism of fire as the national team captain.
Image: Deryck Foster/BackpagePix

They say you learn more from defeat than you do from victory.

For Proteas limited overs skipper Quinton de Kock‚ the learning process has been a painful one.

There’s still the three-match ODI series that starts in Paarl on Saturday where more lessons could be dished out.

De Kock has pretty much done all the heavy lifting when he’s been able to‚ but his example hasn’t been followed by the batting group.

The fact that he’s been on the receiving end of two spankings against Australia hasn’t deterred him from opening up his mind.

“I’m still taking things in my stride and I’m still learning. There are a lot of things I didn’t see when I was a normal player.

“I’m asking a lot of advice from former captain Faf du Plessis but I’m still learning. I hope I can get better and put the results on the board.”

Saturday’s first ODI is one of six SA will engage in before they pull the plug on what has been an unforgettable summer in so many ways for the Proteas both on and off the field.

After three Australia ODI’s‚ there are three more against India away.

The 2023 Cricket World Cup is still some way away‚ but De Kock understands the need to get on the reconstruction train.

“Now’s probably a better chance to give some of the young guys an opportunity while the 50-over World Cup is still some time away.

"From a rebuilding perspective‚ there has to be a time when we have to start somewhere‚” De Kock said.

“There are some really good players around who deserve a shout at the top level. Whether they take chances is entirely up to them.”

Back to the Newlands massacre‚ the South Africans were cleaned out by the Australian visitors by 97 runs on Wednesday evening.

It was the second of three games were SA were not only routed‚ but failed to cross three figures.

It was a case of De Kock out‚ all out as in the heavy losses‚ SA lost their captain early‚ thereby losing their batting spine very early.

When De Kock fired in Port Elizabeth‚ SA played out of their skins to tie the series.

De Kock isn’t a man of many words‚ but even he was at odds to explain how they were hammered twice in three games.

"It was another blowout the way I see it.

"It’s not good enough doing it twice in one series. We’re going to have to have a good look at ourselves and ask some honest questions‚” De Kock said.