Boucher optimistic for ODIs against Aussies despite troubling T20s 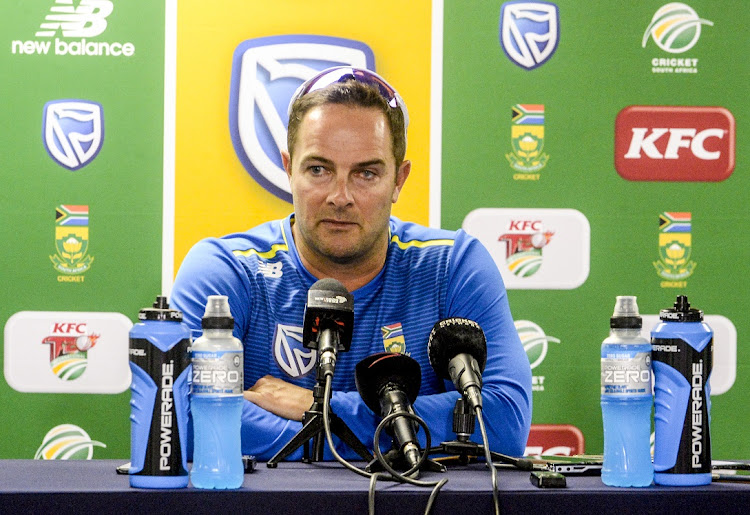 South Africa coach Mark Boucher at the post-match press conference for the first T20 International against Australia at the Wanderers in Johannesburg on Friday, February 21.
Image: Sydney Seshibedi/Gallo Images

The ODI series that starts on Saturday in Paarl will be South Africa’s first step towards some sort of redemption after their embarrassing T20 showing.

Australia has been a limited overs side who have been on the rise and while South Africa’s stocks have indeed plunged‚ they hit new depths with massive and unforgettable defeats.

The longer 50-over format should provide the hosts with some sort of respite‚ even though Paarl tends to be quite warm at this time of the year.

The block‚ though‚ is sizzling for Proteas team director Mark Boucher‚ who understood why the cricketing public was wholly disappointed by South Africa’s showing in the first and the third T20s in Johannesburg and Cape Town.

Australia are also still finding their way as a 50-over side‚ with their middle-order puzzle not quite completed. Boucher‚ however‚ can’t be worrying about Australia’s issues as South Africa’s plate is full. The former wicketkeeper‚ though‚ is quite optimistic.

“It was a disappointing two games that we had in the T20 series against Australia. If you look at it from a cricketing perspective‚ we put ourselves under pressure with the ball.” Boucher said.

“We have to be on song in every department of our game‚ so we’ve got to start off really well. It’s a new format and we’ve got a bit of confidence going into it with the youngsters that performed so well against England.”

Marnus Labuschagne solved a long-standing top-order problem for Australia’s Test side. The same will be expected of him for the limited overs unit.

With this being his first cricketing trip back to the land of his birth after leaving as a 10-year-old‚ he’s not even fazed as to how his surname his pronounced.

Labuschagne’s ODI career is already three matches old‚ but he already has a clear idea of what he needs to do to nail down a spot.

“That role at No 4 is one that I want to continue improving in and make it a spot that I can continue in being successful in. It was disappointing that in the two opportunities where I got past 40‚ I wasn’t able to kick on. That was a learning experience‚” Labuschagne said.

“It’s about making sure that I time the back end of my innings quite perfectly and not pull the trigger too early.”