Ollie Pope is England's last hope of a 300-plus total 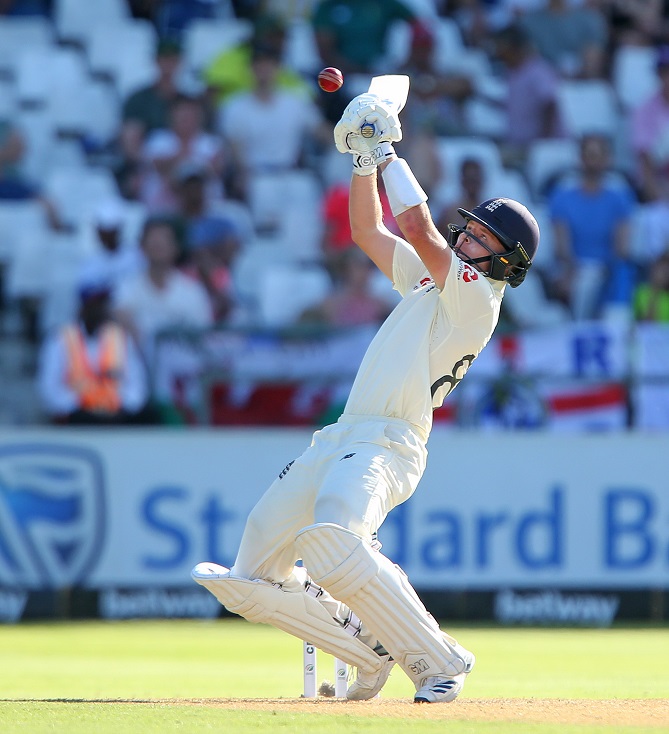 England's Ollie Pope plays a flick over the wicketkeeper for a boundary on day 1 of the second Test at Newlands.
Image: Carl Fourie/Gallo Images

Ollie Pope could have featured in the first Test, but the lurgy that swept through England's side also knocked him over.

It left him frustrated, but also explained the intent and the purpose in his batting on the first day where he helped his team cross 250 on a day where the batsmen all got in, but didn't convert their starts.

Pope had a feel for SA conditions in the warm-up against a CSA XI in Benoni, but sickness laid him low to a point where he missed the first Test that England lost by 107 runs.

Pope wasn't happy that he missed the first Test, but he said that game was a strange one in many ways.

“That first Test couldn't be more frustrating from a personal point of view. There was 10 days of hard work and prep for that first game, I scored my runs in the warm-up and fell ill the day before. It was frustrating but it's awesome to get a few runs,” Pope said.

The England and Wales Cricket Board are “cautiously” backing a proposal that would mandate four-day World Test Championship matches from 2023.
Sport
1 year ago

“That first game was ridiculous. Everyone was getting sick at some point but luckily we are through the illness. Rory Burns' injury was unfortunate, that stuff happens and we're gutted for him.”

With Pope unbeaten on 56 with a life after Kagiso Rabada got him with a no-ball, he represents England's best chance of getting close to 300.

Like they did against Sri Lanka in Durban with Kusal Perera during that legendary chase, Faf du Plessis kept the field back when Pope was batting and brought it in when last man James Anderson was on strike.

Pope said he's been in that situation before, but SA did try to get him out.

“Not really. I've been in that situation a couple of times and that's generally what sides look to do,” he said.

“With the way we played, it was probably the right thing to do. You can see when batters are in and they bat with the tail. They try to manage the strike well. The way we played was quite smart.

“Rabada got me out with a bumper, but he stepped over the line. When they're bowling bumpers, they'll try to have a man in every position. If I hit it over them, then it's fair play to me, but they'll definitely be thinking of getting me out.”

Pope was the only England batsman who crossed to 50 on a day where all the front-line batters barring Zak Crawley passed 25.

Pope acknowledged the frustration of not converting, but said the surface was far trickier than it looked.

“When you get out in the 30s, you've done the hard work. The hardest part of batting is getting to 30, so when you get out at that stage, it's the most frustrating thing.

“Whether that's the wicket or the way we played, we'll see on the second day when we expose whatever that is in the wicket,” Pope said.

“Maybe that's the reason we got out in the 30s because the old ball nipped and there's a bit of variable bounce. Hopefully we can expose it on day two.”