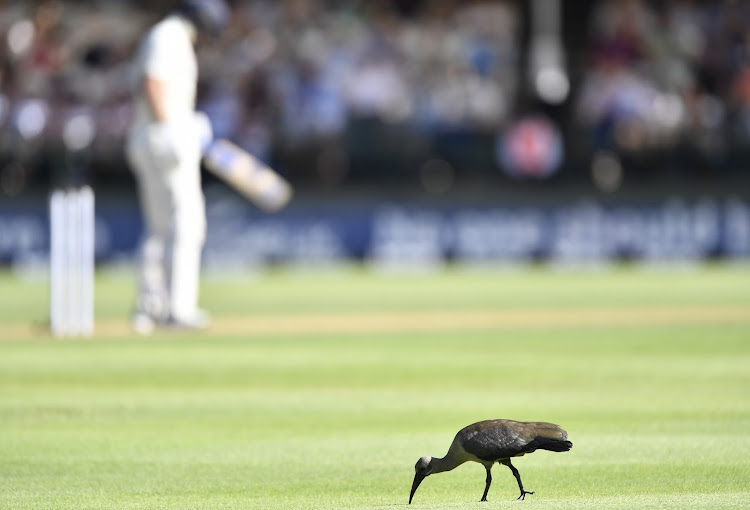 A hadeda ibis (bostrychia hagedash) minds its own business while day one of the 2nd Test match between South Africa and England proceeds around it at Newlands Cricket Stadium on Friday.
Image: Ashley Vlotman/Gallo Images

A beer snake at the Melbourne Cricket Ground will most probably get you kicked out of the ground, but not at Newlands.

That is probably the difference between the serene but fun-loving nature of the home of cricket in SA and cricket's great concrete bowl cathedral in the Australian state of Victoria.

There are more seats and definitely more history at the MCG, where more than a 100 Tests have been played, but the packed-out Newlands with a reduced capacity that somehow hinders movement around the ground, is a fun place to be.

The project, on the Kelvin Grove side of the ground, is a monstrosity at the moment.

When it is completed sometime next year, it stands to help the ground make a fair bit of money.

The joys of Newlands. Constructing beer snakes with freedom... You'll get kicked out of the MCG for this... Ask Jordie Barrett.... pic.twitter.com/BmptcpHKkH

Money though is something that'll definitely be made from this Test, especially with the first three days being sold out.

The England fans made sure Newlands, despite the known reverence of the ground, feel like a bit of Edgbaston.

The sun wasn't warm enough to inflict serious sunburn but copious amounts of alcoholic beverages were dealt with.

Most of it was good-natured and they're a bunch who understand their cricket.

One would hope they'd be able to keep their spirit until the final Test at the Wanderers later this month where they'll be confronted by the joyful spirit of the Gwijo Squad.

As the millennials would say, it's going to be lit, but before that, they've got the St George's Park brass band to contend with.

It was a harsh, yet comical reality that hit home, but despite England's clear financial strength, it hasn't quite translated into serious Test dominance.

There also was the hadeda ibis, that noisy bird that refused to vacate the field.

When it was narrowly missed by the ball when a Ben Stokes drive headed towards it, the crowd oohed, then chuckled.

It wasn't about to move from the field and Dwaine Pretorius knew it.

“I'm just glad it didn't get hit because I'm sure it would have negated Ben Stokes's drive and I saw Vernon also tried. It would have been interesting if play was stopped if it was hit. I think hadedas will be happy,” Pretorius said.

This hadeda stuck around longer than any of the England batsmen. He pushed and prodded but boy, he stayed. #SAvsENG pic.twitter.com/GGZvh1UOX2

It's a pity they only come here once every four years, but it's worth the wait.

As I was to approach the Barmy Army pic.twitter.com/qT1h1vwwFU

The England and Wales Cricket Board are “cautiously” backing a proposal that would mandate four-day World Test Championship matches from 2023.
Sport
1 year ago