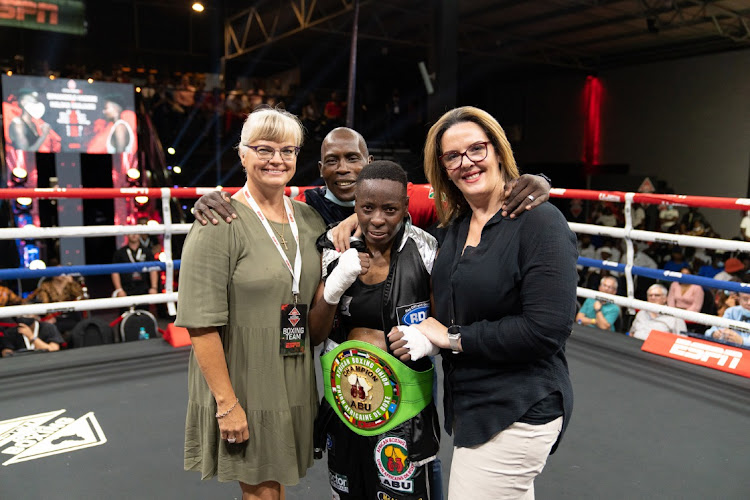 The Lord is close to the brokenhearted and saves those who are crushed in spirit. This biblical quote was used yesterday by promoter Shereen Hunter, manager Colleen McAusland, trainer Anton Nel and boxer Smangele “Smash” Hadebe when they recalled the sad moments they went through individually.

It was Hadebe’s historic win in becoming the first female boxer in SA to win the ABU belt – the flyweight title – in ESPN Africa’s tournament in Fourways last Thursday night that triggered their emotions. They cried tears of joy yesterday.

Hunter, who promotes Hadebe under Unleashed Combat Sport, lost her husband Lionel in 2019. The former pro boxer had established himself as one of the top trainers in SA and Hadebe was one of his charges.

Hadebe was sexually abused from the age of seven but could only share that ordeal with her mother in 2019 when she was 27 years old.

Their passion for the fistic sport was the glue that kept them together.

“I am not surprised at all to see Smangele go from strength to strength. She is lining up with exactly what Lionel said she would be – a champion,” said Hunter.

“I am grateful that we had a good manager in Colleen that really kept the team going the last two years and richly invested in Smash. I am also grateful to the Gauteng Promoters Association who kept my morale up through dark days.”

McAusland said her son was like a brother to Hadebe and that she was tempted to walk away from boxing when he died.

“I mean, I was still hurt by  the death of Lionel, who was a brother to me, and my son followed. My other boxer Lebo Mashitoa lost his one-year-old son in December. We’ve had tragedies. Smangele has been through pains and I hope her win opens doors wide for her.”

Nel says he had promised his wife that when he quit the sport, he would spend quality time with her to make up for all the time lost when he was still a fighter.

“Her passing killed me inside,” he said.

“My friend Rick Rex [a successful business owner whose company is a major boxing sponsor] called me and advised me to come train a fighter in what has turned out to be a healing process.” He has a 100% record – three wins in three fights.

“I was unsure how to treat Smash when she joined me four months ago. She said I must treat her the same way I treat my male boxers. It’s been wonderful and I commend her for a job well done,” he said.

“I hope my victory brings hope to Shereen, Collen and Anton. It taught me not to give up in life. It motivates me to push harder because I want to be a world champion.”

She also holds the SA belt.

The fight fraternity must welcome the fantastic news that Boxing SA has already begun working on the yardstick that will be presented to promoters ...
Sport
5 months ago

The Nkangala District Municipality will host a mini open style, formerly known as amateur tournament, at the Bears Palace in Carolina, Mpumalanga, on ...
Sport
5 months ago

African Boxing Union vice-president Peter Ngatane is satisfied with the performance of referee Namhla Tyuluba during the flyweight championship ...
Sport
5 months ago
Next Article