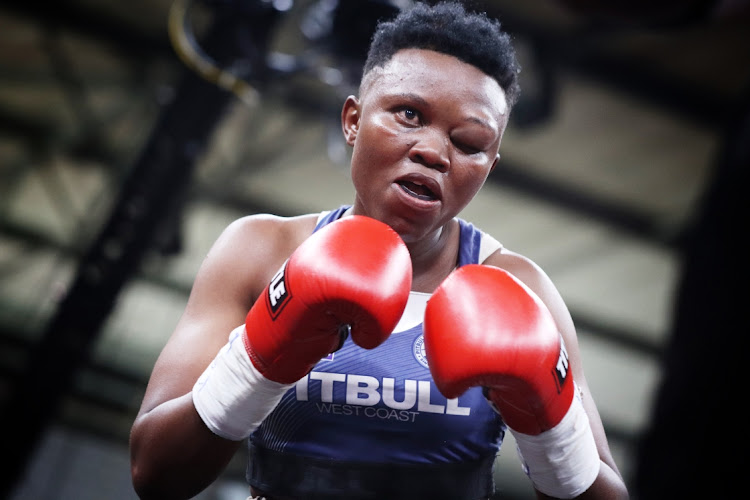 African Boxing Union vice-president Peter Ngatane is satisfied with the performance of referee Namhla Tyuluba during the flyweight championship between SA’s Smangele “Smash” Hadebe and Tanzanian Halima Vunjabel in Fourways on Thursday evening.

Ngatane supervised the fight, which was televised live by ESPN Africa and staged by Walt Disney Africa. “I am happy, and actually I think Namhla did very well,” he said. “She did not interfere with action and gave boxers room to express themselves.”

But on the flip side, her discretion should have superseded existing rules or regulations that were applicable in the fight after Vunjabel’s eye was closed completely from as early as the third round. What made it even worse was when she got cut badly twice on top of that eye in round four.

Ring side doctor Steven Selepe, who examined the wound, advised Vunjabel’s cornermen to rescue her but they did not. The whole thing degenerated into an eyesore as Vunjabel was visually impaired.

A fight is stopped when a fighter is shipping unnecessary damage in a fight they can’t win or when they can’t adequately protect themselves, and that was the case with Vunjabel, who needed Tyuluba’s protection.

Sowetan approached Ngatane for a comment and he said: “The responsibility was with the boxer’s corner in terms of protecting their boxer. Some referees would give people a leeway, especially in title fights, more especially where the wounded fighter keeps fighting. It was the case with Vunjabel, who was on the offensive taking the fight to Hadebe despite her condition.”

Meanwhile, Sibusiso Zingange ended the reign of Phila Mpontshane as the SA junior lightweight champion with a lopsided points win. The defending champion never got going and missed wildly. Either Mpontshane was ring rusty for not having fought for almost two years or Zingange was just too good on the night. He even dropped Mpontshane for a count in round seven.

Khensamahosi Makondo says he is aware that there are many fight fans who are not convinced about his pedigree as a fighter, with the obvious ...
Sport
5 months ago

History should spur on BSA 2017-18 prospect of the year and current SA flyweight boxing champion Smangele “Smash” Hadebe to do everything possible in ...
Sport
5 months ago

Tyson Fury will defend his WBC heavyweight title against Dillian Whyte on April 23, the reigning champion announced on social media.
Sport
5 months ago
Next Article