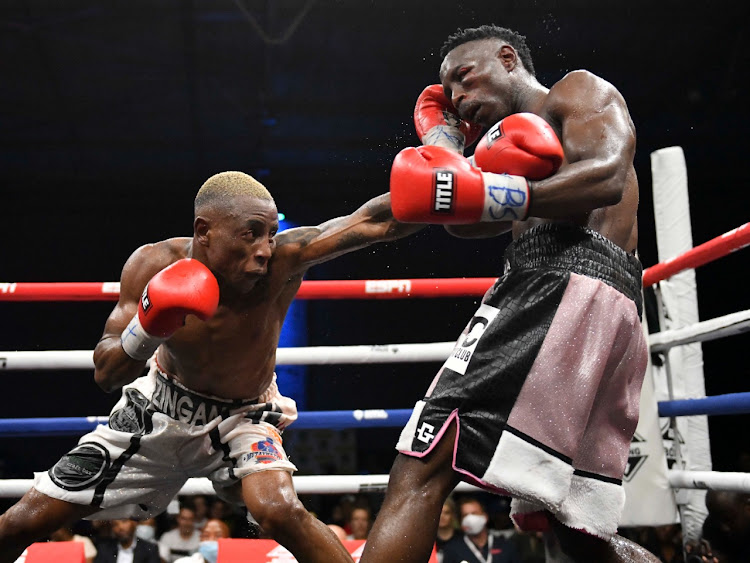 Sibusiso Zingange confounded the critics as he outboxed Phila Mpontshane to claim the SA junior-lightweight crown in Johannesburg on Thursday night.

East London-based Mpontshane, with four successful defences under his belt, went into the headline contest on the ESPN bill as the favourite, but Zingange had other ideas.

The champion postured a little too much in the early rounds while Zingange set the pattern with his speedy and accurate attacks, darting in, landing and getting out.

In a clinch in the early rounds Mpontashe spoke into the challenger’s ear. “He said I’m nothing,” Zingange said afterwards. “He said he’s going to hit me hard. Actually, he doesn’t have power.”

When Zingange, who hails from Ramaphosa in Boksburg, scored a knock-down in the seventh round, he had opened up dangerous daylight on the scorecards.

Mpontshane needed to pull something out the bag, but the more he pushed, the more he got hit, and by the end of the fight his left eye was almost fully shut.

Zingange improved to 17 wins, five losses and two draws while Mpontshane, fighting for the first time since 2019, dropped to 15-3.

The two were supposed to have fought in December, but the bout was postponed after Mpontshane tested positive for Covid-19.

“The key was to pressure him, he had ring rust,” said Zingange, who had engaged in five fights in the time his opponent had been inactive.

Now he’d like to defend his title, preferably five times to own the belt outright. Mpontshane fell one short on that score on Thursday. 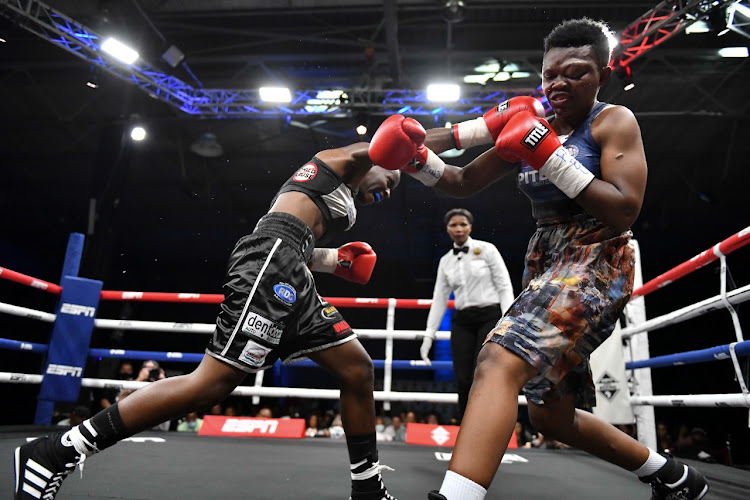 Hadebe was too slick for her opponent, whose Pitbull ring name matched her style — pure aggression with no skill. She was easy to hit and for most of the night looked like a walking punch bag.

By the third round Vunjabei’s left eye was almost entirely closed, though it didn’t stop her from pressing the attack. However, it did stop her seeing plenty of right hands that knocked her head back time and again.

The East African’s rugged tactics, which literally included charging across the ring, were not enough to destabilise Hadebe’s scientific approach.

History should spur on BSA 2017-18 prospect of the year and current SA flyweight boxing champion Smangele “Smash” Hadebe to do everything possible in ...
Sport
5 months ago

The South African was also game to fight at close quarters, in which her superior speed gave her the advantage.

There were a few occasions where Hadebe looked like she was a punch or two from ending the fight early, but Vunjabei never looked like giving up.

Sithembiso Maduna, the top-ranked SA featherweight contender, confirmed the ratings as he outpointed Abdul-Aziz Kunert, No3 in the pecking order, over six rounds.

Maduna didn’t merely fight off the back foot, he back-pedalled the entire time, but that allowed him to steal valuable punches against Kunert who failed to jab enough in the early rounds.

Kunert, a split decision loser for the SA crown last year, found his range in the fifth round, slipping or blocking punches while landing his own blows, but it was too late.

Journeyman Gift Bholo outhustled Denis Mwale of Malawi over eight rounds to improve his record to 9-11-4. He forced Mwale to fight on the retreat for most of the bout and landed the better punches, though he had to settle for a split decision victory.

Darrin Rossouw delivered a gritty sixth-round TKO victory over Zimbabwean Thembani Mahlanga, who had battled to make the junior-middleweight class the previous day.

Rossouw won the first two rounds easily, but was then dragged into the trenches by a more experienced opponent who held the upper hand on the inside.

By the end of the fourth round “Spanner Boy” Mahlanga had the momentum, but Rossouw changed that with a peach of a right hand that dropped his opponent for a brief count.

He regained his dominance from then on and referee Siyabulela Mani got it right when he waved it over after an exhausted Mahlanga had been dropped again.

Gqeberha-bred Rossouw, who trains in Johannesburg, improved his record to 4-0. Mahlangu dropped to 3-7.

Gauteng has reclaimed the status of being the hub of boxing action and the place to be for boxers.
Sport
5 months ago

Phila Mpontshane is in the hood. The Mdantsane-based fighter arrived in Jozi yesterday.
Sport
5 months ago