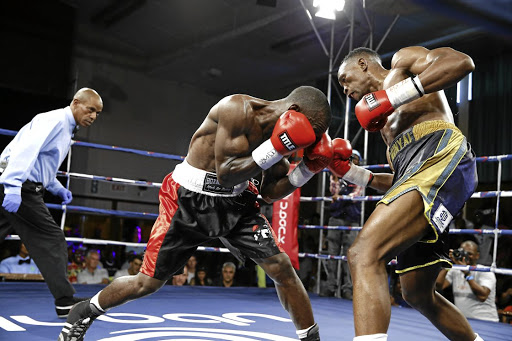 Tshifhiwa Munyai has found his grove as a lightweight fighter and has challenged Siphosethu Mvula for the SA title in Randburg in two weeks.
Image: Nick Lourens

Top Gauteng boxing trainer Alan Toweel Junior persuaded his sister, Marianna Toweel, who is a BSA licensed professional boxing promoter to include Rofhiwa "Atomic Spider" Munyai in her tournament that will take place at Blairgowrie Recreation Centre, Randburg, on March 15.

That is how much faith the trainer has in his 34-year-old charge whose consistency at lightweight has earned him a crack at the vacant domestic title.

Munyai - who has won all his three fights in the new weight class - will welcome Siphosethu Mvula in the main bout of Marianna Toweel's Charing Cross Promotions bill. While Munyai is number four in the rankings, Mvula, who is trained in Duncan Village by Mzamo "Chief" Njekanye, is number one.

There has been some concerns over Munyai's stay in the fistic sport, especially after the former Commonwealth and WBA Intercontinental bantamweight, IBO and WBA Pan African junior featherweight holder's stoppage losses to Azinga Fuzile and Rofhiwa Munyai.

Toweel - who has helped this enormously talented fighter win three fights consecutively since they teamed up more than a year ago - said:

"He seems to have the will to win. He is disciplined and training extremely hard. I think the mindset is right. I have so much faith in him in that I persuaded my sister to include him in her tournament to fight for the SA title."

Toweel knows Mvula very well. His other boxer, Jeff Magagane, fought and lost to him in 2017. The same applies to Njekanye, who was in the corner when Fuzile bombed Munyai out in three rounds.

"I think we are in a tough fight. Mzamo knows Tshifhiwa very well, but I think they will find a completely different fighter to the one who lost to Azinga," said Toweel, who was in Maemu's corner when he stopped Munyai in 10 rounds.

"He looked drained, like someone who has weight problems in both his fights against Azinga and Maemu. That is why I advised him to move up to the lightweight division when he joined me and look he has stopped two of his three opponents to qualify to challenge for the SA title."

Munyai, from Venda, has 246 pro boxing rounds under his belt and boxed in over 10 championship fights. He has won 31 of his 38 fights and boasts 18 knockouts against six losses, three by stoppages, and a draw.

"The attendance in a big hall away from people was packed because people came to support him and he never disappointed," said Malinga, who promotes under Starline Boxing Promotion.

"He was way ahead on points before the stoppage."