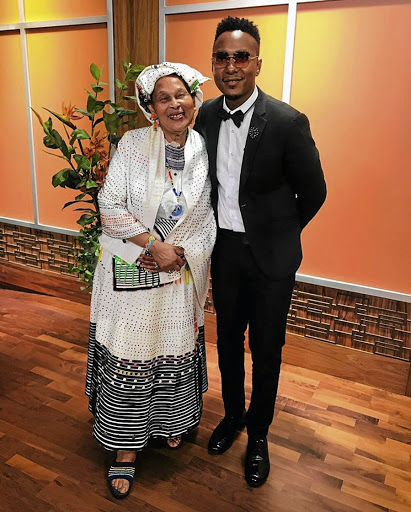 Thembi Lerole and one of her sons Tebogo, a member of Kwela Tebza.

The haunting sound of the pennywhistle evokes images of Alexandra, Sophiatown and other culturally vibrant freehold neighbourhoods in 1950s South Africa.

They called it kwela after the pick-up police van - kwela kwela - that ruled black lives at the height of apartheid.

It was the music of the streets played by the bright sparks who lived by their wits. Whether the characters were pickpockets, dice throwers, loafers or juvenile delinquents, they had to evade the kwela kwela, lest they end up at notorious jails around the Reef.

Tom Hark, one of the popular kwela tunes at the height of the kwela craze in the 1950s, brilliantly illustrates this classic street scenario between the cops and gamblers. It opens with a theatrical township scene involving a school of dice throwers. There's the typical snapping of fingers, rattle of the square bones on the concrete floor and excited chatter.

Then a pick-up van approaches and the boys cover the gambling school, whip out their instruments and begin to play. Then follows an irresistible mournful tune ever blown from a pennywhistle.

That is Tom Hark, an evocative street song that went on to conquer the charts across the globe. Tom Hark was composed by Elias "Shamba" Lerole and recorded in 1956 under the EMI label with his brother Aaron "Big Voice Jack" Lerole and their street band under the stage name Elias and His Zig-Zag Jive Flutes.

Its original title was Tomahawk, an apt name that refers to an axe - a common weapon in the black Johannesburg of the 1950s and was used by gangsters and other violent characters as an assault weapon. In turn, young musicians like the Lerole brothers used the tomahawk to defend themselves against gangsters from other turfs. However, in their eternal wisdom, white music executives inexplicably changed the title to Tom Hark. And that's how it was introduced to the world.

In 1956, British film producer and director Leonard Brett was looking for a soundtrack to accompany The Killing Stones (1958), a BBC TV drama series set in SA and based on diamond smuggling in Kimberley's mining fields. After Brett was introduced to the street music of the Lerole siblings and Tom Hark in particular, he decided that his search for a theme tune for his TV show was over. Born in Alexandra, the epicentre of kwela, Aaron Lerole, 82, and his brother started playing flutes and pennywhistles in the 1940s.

Like jazz, kwela is essentially a male-dominated style. But back in the 1970s all that was destined to change when Lerole met a young singer and schoolteacher from the rolling hills of Eastern Cape. Thembi Lerole (née Mangisa), 63, didn't only fall in love with the dashing composer and pennywhistler from the city, she also embraced the spirit of kwela with her mind, body and soul.

She recalled that she was taken by the band when it performed in Port Elizabeth. 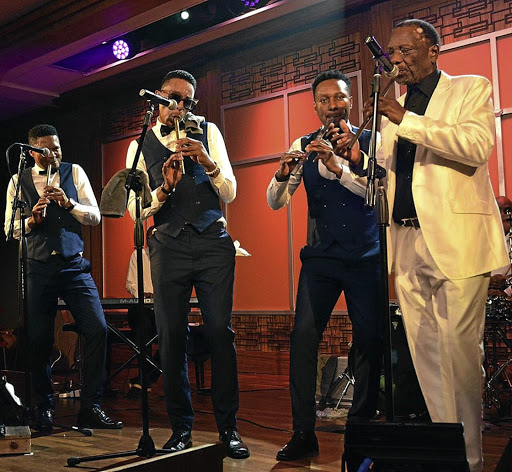 And Thembi was determined to keep the legacy of kwela alive by encouraging her children to follow in their father's footsteps. Today, she's proud to say that she founded Kwela Tebza, the famous pennywhistle trio that's made up of her sons. Tebogo Lerole, 40, first caught national attention in 1994 when he performed a soul-stirring pennywhistle tune at the Shell Road to Fame talent search in Sun City. Although he came third in the contest, his dazzling performance impressed talent scout and music producer Lindelani Mkhize. Subsequently, Tebogo was awarded a recording contract with Teal Records.

Titled Kwela Tebza, the album was released in 1996 and features brothers Tshepo and Mpho, and sister Carol on vocals. One of the highlights of their colourful journey was in 1995 when they were invited at Stockholm, Sweden. They beat 54 bands at a talent search to achieve first place.

Since then they have performed across the world. Their fifth album, Gauteng, is a smorgasbord of revamped classics and new compositions inspired by various musical traditions. With seven albums and several awards, they count Danny Glover and Forest Whitaker among their multitudes of fans. In 2013 their mother designed a teacher's manual for kwela music.

"It's important that we take pride in our own musical traditions and culture," Ma Lerole said. "Our children should be taught South African culture and to value it. It's disappointing that while the world admires and respects what we have achieved in the music sphere, our young people are not proud to be associated with styles such as kwela and mbaqanga..."

Although she has been in the city for a lifetime, Ma Lerole hasn't forgotten her humble roots in countryside. She speaks with pride about her rural upbringing in Khobonqaba, a village in the Eastern Cape. It was an upbringing that was defined by Xhosa traditions and the love for nature. It's therefore not surprising that alongside music, her other passion is wildlife and nature conservation. The latter has inspired the establishment of Khobonqaba Iconic Wildlife Foundation, a family project, in 2010.

It all started after she decided to honour Nelson Mandela who, like her, also belonged to the Thembu people. She believed that the late statesman deserved a rare and special gift for his achievements in the political arena.

A lion skin seemed like a perfect gift, particularly for this son of Africa who was also of noble birth. After a futile search for the prized skin of the king of the jungle, she arrived at the Lion Park, north of Johannesburg.

However, the owners didn't have any lion skins and bluntly told her that they were "not prepared to kill a lion for Mandela". But they had two beautiful lion cubs. Even more significantly, they were a rare breed of white lions and the park owners were prepared to donate them as a gift for Mandela. After a patient wait for months, Thembi was finally invited by Chief Zwelivelile Mandela at the Mvezo royal palace to present her gift on the inaugural Nelson Mandela Day (18 July) in 2010.

"His whole face lit up when he saw the young lions. He was particularly touched when he heard that the two cubs were named after his parents - Mphakanyiswa and Nosekeni. The gift was a special tribute to him."

She had in mind the sons of the former Transkei such as Mandela, Oliver Tambo and Walter Sisulu as worthy recipients of such gifts.

Ma Lerole believes that naming some of the majestic animals after "our human icons will create awareness for their survival. The Mandela Lions are a case in point. The aim of our foundation is to honour individuals who have worked tirelessly to improve society."

The foundation honoured 11 recipients at a gala dinner at Kyalami Castle in Midrand at the weekend.

Joseph Bhekizizwe Shabalala, 78, was a gentle natured international celebrity with humble beginnings in the countryside.
News
1 year ago
Next Article