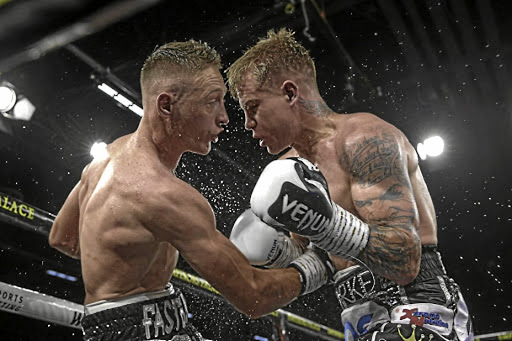 The pressure is on for Brandon Thysse going into his eagerly awaited rematch with Boyd Allen at Emperors Palace in Kempton Park.

It was at the same venue that Thysse lost via a split points decision in the WBA Pan African junior middleweight belt on May 10 last year.

The second fight will take place on March 21. Allen's belt plus 60% of the R750,000 purse money that will be paid by Golden Gloves to the winner are at stake. The winner has also been promised a top 15 rating by the WBA.

Thysse is trained by Damien Durandt while Peter Smith is in charge of Allen's career. Thysse has been a professional boxer since 2015 and has fought 81 rounds with 12 wins, two losses and a draw.

On the other hand, Allen is a former mixed martial arts fighter, who is still a newcomer to the sport of boxing. Having fought his first pro fight in 2018, Allen remains undefeated in five fights with only one championship bout, which he won against Thysse.

Skill-wise, Thysse is a better boxer, but Allen's advantage is his mental toughness, which has helped him to defeat favoured oponents such as Wynand Mulder, John Bopape and Tristan Truter.

Durandt said: "We are going in there to correct the wrong decision that was handed out in the first fight between the two boxers."

Allen said he just wants to go in there and show his worth as a boxer. He stopped Truter in the 10th round in November while Thysse did the same to Roarke Knapp in seven rounds in the same tourney.

Ricardo Malajika will welcome Jonas Sultan of the Philippines for the IBF Intercontinental junior bantamweight belt.

It is impossible for boxing matchmakers to please everyone when it comes to putting together boxing bouts because people have different views about ...
Sport
1 year ago

Who will take a million rand home - Thysse or Allen?

Countdown to Golden Gloves finale heats up.
Sport
2 years ago