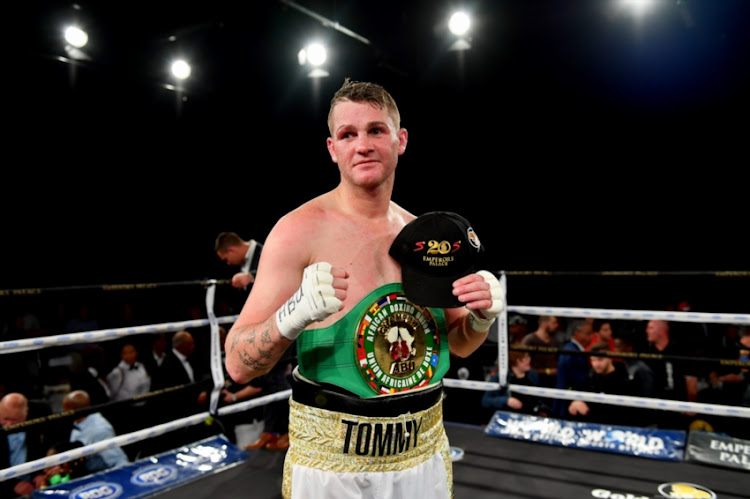 Tears flowed at the press conference to drum up hype around the tournament featuring the rematch between Tommy Oosthuizen and Thabiso Mchunu at Emperors Palace on December 8.

The waterworks came from the Oosthuizen camp‚ specifically little Tommy‚ when his dad went to do some pad work with trainer Harold Volbrecht at the Smith’s gym in Fourways.

Not even a kiss from dad could end the howling‚ but once Oosthuizen starting throwing his demonstration bombs in the ring‚ little Tommy’s mouth closed‚ his tears stopped and he watched transfixed.

He was clearly impressed by what he saw and his dad is already looking beyond the grudge bout against Mchunu.

Oosthuizen won the decision last time out‚ although some felt Mchunu should have got the nod.

Oosthuizen said he had been in training since getting out of jail in mid-May after serving time on a drugs-related charge.

“Ever since I was in incarceration I’ve been preparing‚ I’ve been training.”

Asked about a possible Lerena bout‚ which Oosthuizen spoke about a couple of months back‚ Oosthuizen said: “I’ve been talking a fight with Kevin because I thought it was a quick route to the top.”

“He has four belts. If you believe in me‚ give me a chance fight AU.”

Mchunu‚ on the other hand‚ is looking no further than December 8. “Definitely‚ I’m going to win the fight.”

Sharing the top billing is unbeaten IBO welterweight champion Tulz Mbenge‚ who is fighting Miguel Vazquez‚ a Mexican with 46 fights.

Mbenge‚ the last SA boxer to win a Commonwealth Games medal‚ a bronze in 2014‚ has been studying the challenger.

“It’s a good fight for me. He’s a very experienced boxer. I’m also experienced … he doesn’t scare me.

“He’s a mover‚ I need to adjust to his movement.”

Also on the bill‚ Wade Groth makes the first defence of his SA middleweight title against Walter Dlamini and Boyd Allen takes on Wynand Mulder.