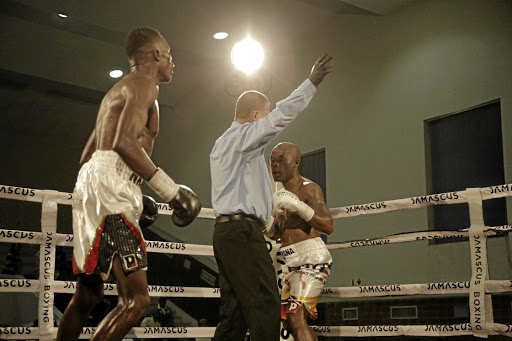 Mokwana, a 34-year-old fighter, was stopped in the sixth round by Ayanda Nkosi at KwaThema Civic Centre, Springs on Sunday last week.

Fernandez wants him to decide whether he should continue fighting after he struggled to make the lightweight (61.24kg) weight limit.

He said shedding too much weight killed him for his fight with Nkosi, and that is not healthy for a man who is almost 40 years old.

"He was finished [drained] when I took him to the official weigh-in on Saturday," said the respected mentor, who attributed Mokwana's situation to ageing.

"The more we grow older, the bigger we become but we don't notice that, so it is easy in boxing because there are weight limits that control the sport.

"We will need to sit down and talk but one thing I can share with you is that if Thompson wants to continue fighting, I will support him on one condition: he must at least move up to the junior welterweights, where he won't have to shed too much weight to be within the limit (63.5kg)."

Fortunately Mokwana, who has been around with successes since 2010, acknowledged the weight issue.

Mokwana said: "I first want to congratulate Ayanda; he's a good boxer. He hits very hard and I think he's got a bright future ahead of him.

"Secondly, I have no choice but to move up the weight class.

The professional boxing career of undefeated cruiserweight Akani “Prime” Phuzi from Malamulele in Limpopo is starting to heat up.
Sport
2 years ago

"I will sit down with Manny and talk about my future. If he says quit, I will definitely heed his advice because that will be in the best interest of my health."

His world came crushing down when referee David van Niewenhuizen stopped their fight when Mokwana was unable to defend himself, marking his third consecutive stoppage loss - the other two being against Simphiwe Vetyeka and Michael Mokoena.

It was his 13th defeat overall.

The fight last weekend, staged by Fantastic 2 Promotions of Elias and Fana Tshabalala, took place at the venue where Jacob "Dancing Shoes" Morake handed Brian Mitchell his only loss in 1982.

Mitchell avenged that loss in their second meeting at Wembley Arena in 1983.

They met for the third time at the same venue in Springs and Mitchel defeated Morake before their fateful fourth clash at Sun City in 1985.

Morake collapsed in the 12th round of that fight, and was rushed to Lady Dudley Hospital in Pretoria but died the following day at the age of 30.