'My money on Xaba, Van Zyl to end foreign domination' 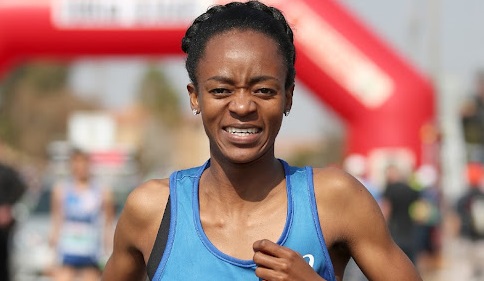 With the 2022 Spar Grand Prix season looming, past champion Kesa Molotsane believes Glenrose Xaba and Irvette van Zyl have a chance of wrestling the title from Ethiopian Tadu Nare of Nedbank Running Club.

It has been a while since a South African has won the Grand Prix, after falling short in the last two editions. In 2019, Namibian Helalia Johannes took the title. After Covid-19 forced a no-show for athletics in 2020, Nare won the title last year when the Grand Prix returned.

With the new season looming, there's widespread concern that the title may fly past the borders again. However, 2017 champion Molotsane is among those who feel this year will be SA's time once again.

Molotsane, who finished second with 129 points behind Nare's 150, has tipped Xaba and Van Zyl for the title.

“With her level of fitness at the moment, Glenrose as well as Irvertte... honestly speaking I’m positive it (the title) will be regained. I’m looking forward to the day we keep it in our home soil,” said Molotsane of Bloemfontein.

“With the calibre of athletes we have in SA, we do have an improvement in terms of the status of athletics. I’m looking forward to having them climb up the pedestal and winning the Grand Prix.”

The six-race competition this year starts on May 28 in Gqeberha with the last leg on October 23 in Cape Town. Other dates for the 10km races are as follows: Durban (June 26), Mbombela (July 16), Tshwane (August 6) and Johannesburg (October 2).

Molotsane says she's looking forward to the first race, saying it can set the tone for the rest of the Grand Prix dates.

“Every race is just as important. History has taught us missing one can rearrange your status in the Grand Prix,” she said.

“I think the first one is important for you to find your feet in the Grand Prix and at least know what you’re working towards. For me individually it is very important.

"I haven’t had a good start in a season. I’m going to use this weekend to prepare for Gqeberha. They always have good weather in May, I’m looking forward to it and I’m hoping for the best.”

This year's Spar Grand Prix will have a packed calendar as it will host six events nationwide, with Mbombela being the latest addition.
Sport
1 week ago

Reigning 100m and 200m SA junior champion Banele Shabangu oozes exuberance as she speaks about her ambition to dominate the domestic athletics tracks ...
Sport
2 months ago

Glenrose Xaba and Tayla Kavanagh will renew their rivalry at the Absa 10km City Run in Durban on Sunday.
Sport
6 months ago
Next Article