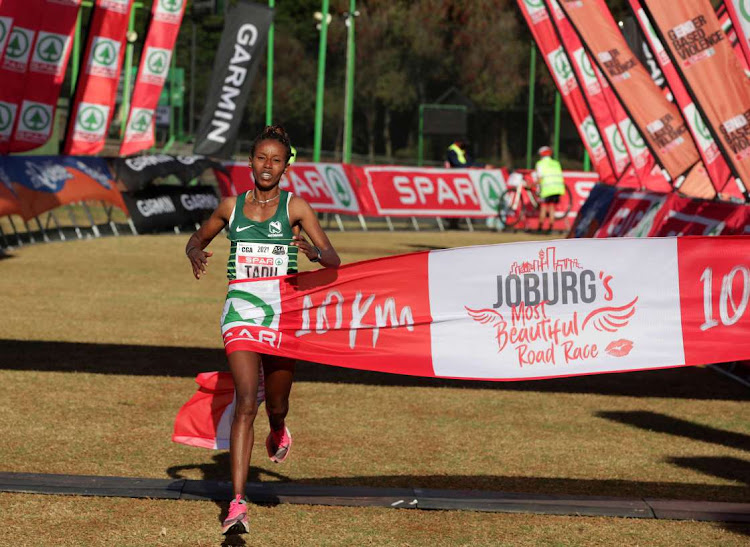 Ethiopian runner Tadu Nare may have dominated the Spar Grand Prix, winning five races in succession, but she has faced challenges in achieving that.

Nare, who won the Johannesburg leg yesterday in Marks Park, has been granted a five-day visa for each race since.

Yesterday, she left immediately after completing the race and will embark on another four-and-a-half-hour flight from Addis Ababa to Johannesburg on Friday for the final race in Gqeberha on Saturday.

Speaking after winning the race in a time of 33:20, the 20-year-old admitted that the travel was taking its toll.

“I find it very tiring because I have to fly back to Addis Ababa after every race because they will only give me a five-day visa. It would be better for my training if I could stay here,” Nare told the media.

With 125 points in the bag, Nare is the favourite to clinch the R190,000 grand prize in Gqeberha as she just needs a win in the final leg.

She believes she would have run a faster time had it not been for fatigue.

“I’m planning to run fast in the last race, but we will see and it will depend on the weather conditions,” she said.

“After each race she has to go back to Ethiopia, so there is a lot of travelling which she has to encounter,” Bester said.

“It’s a South African problem, especially for Ethiopians, because some of them, when they get visas and when they come here they disappear and don’t go back to their country. That’s why the rules are so strict.”

Prominent middle-distance runner Glenrose Xaba is eyeing the highest place on the podium in the Spar 10km Grand Prix Series.
Sport
10 months ago

Ethiopian middle-distance runner Tadu Nare is closing in on her first Spar Grand Prix 10km title with two races remaining in the series.
Sport
10 months ago