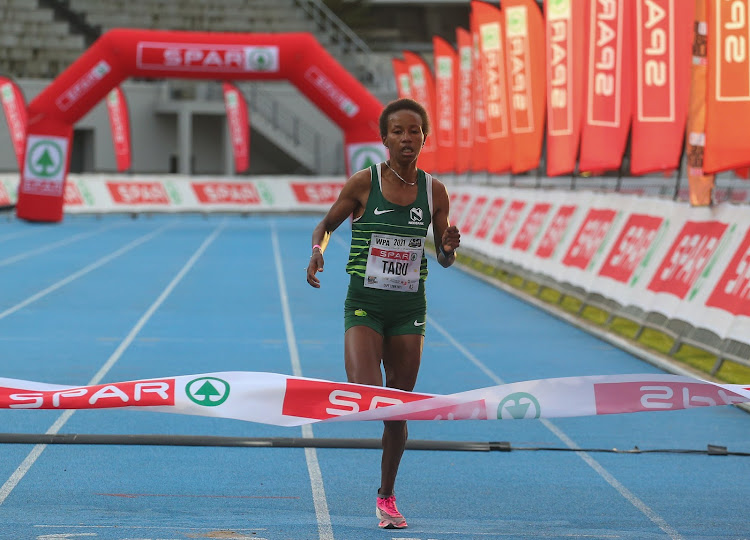 Ethiopian sensation Tadu Nare is on the cusp of making history by winning her maiden Spar Grand Prix 10km title.

Tadu, 20, is at the top of the leader board with 125 points, followed by Kesa Molotsane of Murray & Roberts on 105 points.

Fortunate Chidzivo of Retail Capital is in third place with 102 points. If Molotsane upsets the high-flying Ethiopian, she will finish the series with 150 points, and Nare must have a poor race, which is highly unlikely given her form.

There are no bonus points at this year’s race, and it gives Molotsane hope. Molotsane won the title in 2017, and would be happy with an overall second place in the series.

The final race of the series will take place in Gqeberha on Saturday, and Nare is poised to collect the winning amount.

“Giving up is not an option. We will run until the final race of the series,” Molotsane told Sowetan.

Nare won the Johannesburg race at Marks Park Sports Club last week when she clocked 33:20:2 ahead of Molotsane, who stopped the race in 34:34:3.

Molotsane and Glenrose Xaba, who won the series in 2018, took turns to finish in second place, and they could not keep up with the youngster. They will do their best to prevent Nare from completing a clean sweep in the Eastern Cape in the next race.

Molotsane said she was grateful that she and the other ladies were allowed to run during the uncertain times of Covid-19. “It’s a special year to race and it would be great to end it with a first-place podium finish,” she said.

Ethiopian runner Tadu Nare may have dominated the Spar Grand Prix, winning five races in succession, but she has faced challenges in achieving that.
Sport
10 months ago

Prominent middle-distance runner Glenrose Xaba is eyeing the highest place on the podium in the Spar 10km Grand Prix Series.
Sport
10 months ago

Ethiopian middle-distance runner Tadu Nare is closing in on her first Spar Grand Prix 10km title with two races remaining in the series.
Sport
10 months ago
Next Article