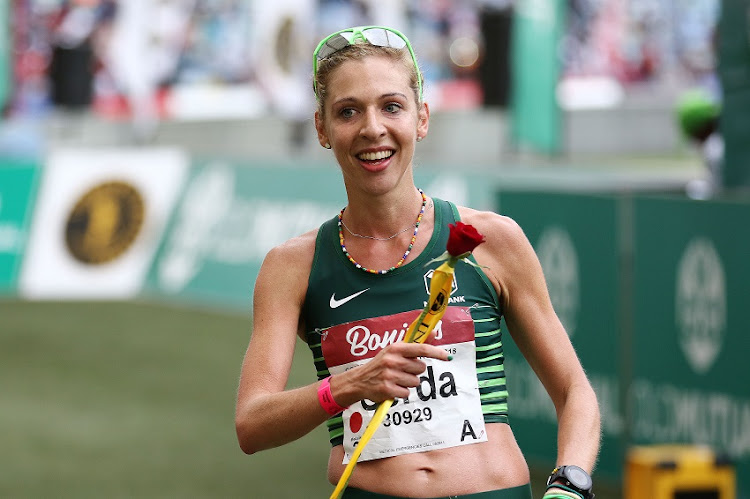 The wait is almost over for long-distance sensation Gerda Steyn to run in her first 42.2km marathon race in SA.

The Nedbank Running Club star has achieved many accolades locally, but the only missing thing is to run a 42.2km marathon in her country.

She won the 56km Two Oceans marathon and the 90km Comrades Marathon titles. Steyn will participate in the Sanlam Cape Town Marathon on October 17, and she is excited about her debut.

She secured 15th place in the Olympic Marathon in Tokyo, Japan, when she clocked 2:32:10 at her first Olympic appearance. Her personal best is 2:25:28, the plan is to run faster than that time in Cape Town, and she is confident that she can do it.

“I am excited and cannot sleep when I think about my first Cape Town Marathon race. I am preparing in Johannesburg, and it is two weeks to go. The excitement is killing me. The race is almost there, and I am counting the days. If I ran faster than my PB, I would be happy,” Steyn told Sowetan yesterday.

She used the Spar 10km Grand Prix Series as part of her preparation to work on her endurance. Steyn secured third place at the Tshwane race two weeks ago by the time of 34:17:4, and she is satisfied with her preparations.

“I am injury-free and healthy. I feel good about myself and ready to hit the road against some of the best long-distance runners in the world,” she said. The organisers are making every effort to impress with a star-studded lineup for the eagerly awaited race.

Kenyan Lucy Karimi, who boasts a personal best of 2:24:24, is part of the exciting lineup, and Steyn is looking forward to running against her. Her compatriot Naomi Jepkosgei, who secured fifth place in the Cape Town Marathon in 2017, confirmed her participation.

Ethiopian Nurif Shimels, who secured a second-place finish in 2019, is part of the top runners on the continent. “I am not scared of the Kenyans and Ethiopians. I am ready to give them a run for their money,” added Steyn.

The Comrades Marathon Association (CMA) has announced that the centennial race will take place on an unfamiliar date of August 28 next year and not ...
Sport
10 months ago

Athletics SA (ASA) boss James Moloi has urged athletes to get the jab to fast-track the association’s plans of opening the sport to the public.
Sport
10 months ago

Organisers of the Sanlam Cape Town Marathon have promised a memorable race for the elite runners on October 17 in Cape Town.
Sport
10 months ago
Next Article