Shawn says he learnt about SA cuisine along the way 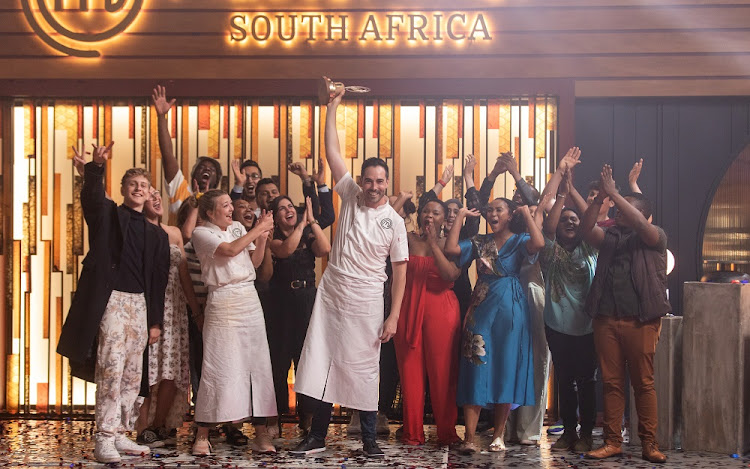 MasterChefSA 2022 winner Shawn Godfrey and the rest of the season's contestants.
Image: Supplied

Godfrey says trying to keep his company with just under a 100 employees going during the pandemic allowed him to make the mind shift that made it possible for him to win the competition.

He admits that he didn’t feel like he was the winner; in fact, he was intimidated by the experience and knowledge of his fellow contestants, but he didn’t allow that to stop him.

Instead he studied, from the first day of the competition up until the day of the finale. Even when people were taking time off to relax and socialise, Godfrey continued to study so he could always do his best.

“My rule... that I told myself was, if I go out on any episode I will be able to walk out with my head held high and say, 'well you know what, I literally did everything I could do to win and if I didn’t, it’s okay', and I never missed a beat and even on the finals night I only slept two-and-a-half hours because I was studying…that’s my secret sauce that I used and I do apply it to anything in life and that’s what I want to give to my children, sometimes you don’t have to be the A grade maths student in the class to become successful, a lot of hard work, focus, dedication and assuring that you are going in there for the win, can get you there too.”

Godfrey was announced as the winner of MasterChefSA last week, but he’s had to keep the secret for over four months.

An amazing visit to an olive farm in the Drakenstein Mountains

I found myself deep in wine country in the Western Cape last week visiting an olive farm.
S Mag
1 month ago

I asked him if it didn’t feel surreal now that we’d all caught up to him and now know he’d won.

“It literally felt like the finale happened again…when the actual win was aired last week, and the hype that was going around and all the newspaper articles and radio interviews that I’ve had, suddenly now it feels like the reality has only happened this week,” he adds.

Godfrey and his family are really good at keeping secrets, they kept the secret of his win but even before that his wife managed to keep it a secret that herself and their kids would be able to visit him on set. The Seven Colours episode, episode 19, was a highlight of his time on the show.

He hadn’t seen his family for about five-and-a-half weeks, then he was surprised by their presence the morning after lamenting to his wife that it would have been nice to have his family come onset.

I enjoyed the episode also because they were dealing with South African cuisine. Godfrey went on to say that he was embarrassed about his lack of knowledge of South African and African ingredients going into the competition.

“I think there is a little bit of a bubble in the restaurant industry and even with cookbooks in SA there is such a huge focus on international type ingredients and then if you go into the major food chains that is duplicated again.

"If you go walk into Checkers or Woolworths and try to find sorghum it’s difficult, you’re going to struggle to find major South African ... let’s call it traditional ingredients. The whole ecosystem is not supporting the development or  let’s call it up liftment of these incredible base ingredients, incredible recipes and there’s a culture that comes with that and it’s not being represented properly in the media and the way we’re developing things.”

There’s a notable chill in the air. The seasons are changing and so too will our preferred meals. Cooler weather requires more rich and warm food. ...
S Mag
2 months ago

Godfrey says his "head space" was very Asian and Euro -centric in terms of his techniques and  ingredients, and that he learnt on the show that there are so many ways to "hero those ingredients and South African recipes and elevate them to fine, dining levels".

He named chef Mmabatho Molefe from Emazulwini restaurant as one of his heroes.

“For me that is the epitome of what should be happening with South African cuisine. Because she’s not saying like chicken feet should be served the way we traditionally see it, she’s saying there’s ways we can elevate it and there’s ways to create new dishes, out of that base.

"And she’s absolutely doing it at another level, it’s like going into a fine dining restaurant but you’re eating things like chicken feet Turin and you’re eating like sorghum ice cream, all these amazing things, and they are incredible.

Diamonds and excellent cuisine are a girl’s best friend. Last week I set off to enjoy dinner at the exclusive Les Creatifs restaurant by Wandile ...
S Mag
2 months ago

"So that’s where my path is going, from my embarrassment of having so little knowledge to like having relatively good knowledge because of the show and then I will only continue after this.”

Godfrey is currently finalising a contract with Pick 'n Pay where he will be a brand ambassador of sorts, he’ll be doing cook-alongs, shop-alongs and some recipe development, as well as working with the Fresh Living magazine.

He has a pop-up restaurant, The Chefs Collective, coming up on April 27 with Darren Badenhorst and Callan Austin at the V&A Waterfront. And lastly, he and his wife have expanded their business The Roasted Dad by launching children’s cooking apparel, Little Roast, which is a children’s cooking range, and there is also an adult version called Roasted and there is also a book in the works.

Drinks with the boys

For most people having something to drink while watching a sports event is typical.So it makes perfect sense that a sports team and an alcohol brand ...
S Mag
2 months ago

If you’ve ever wondered what exactly SA has to offer in terms of the culinary landscape, you’re in for a treat. Media personality and celebrity ...
S Mag
2 months ago
Next Article