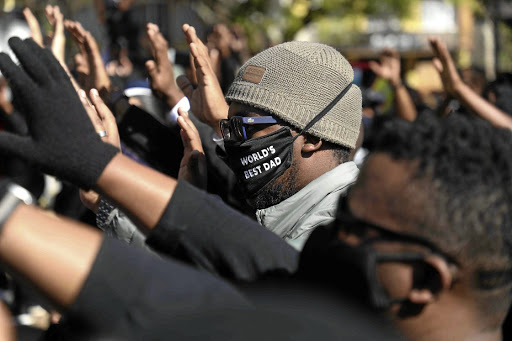 Men should be the ones at the receiving end of the 'burden' of fighting gender-based violence, the abuse of children, femicide and murder. / Thulani Mbele

Father's Day is usually a blissful day, centred on celebration of fathers. In a country with households hugely run by single mothers, those with fathers present in their lives count themselves as being the luckier ones.

As a father myself, who has never met his own biological father, Father's Day is usually a bittersweet day for me. As I observe my children grow older, seeing them become all they've desired for themselves, I release a sigh of relief because it means even without a dad as a direct frame of reference, I was able to raise children I am proud of. I can now safely say, I wouldn't have done anything differently in the way their mother and I have raised them.

But in the same breath, I cannot stop and wonder how it would've been to have that sounding board to help me make sense of fatherhood and the challenges that come with it - someone that was my biological father.

Unfortunately, this is a story far too many people can relate to. Many of us have had to be fathered by multiple, gracious men who were neighbours, older colleagues or uncles but played the role of a father at different points in our lives.

This Father's Day was not difficult to celebrate because of it being bittersweet in terms of my own experience but because, I thought, with everything that is happening in our country, can I really afford to celebrate Father's Day? In fact, can all men afford to celebrate it? Many may think it is unfair to suggest we should not be celebrating due to femicide, rape and abuse of children.

Start a tradition of reading for your kids

This June, Nal'ibali - the national reading-for-enjoyment campaign - is focusing on fathers and father-figures, and the powerful role men can play in ...
Good Life
1 year ago

Well, I beg to differ; I think it is appropriate to feel conflicted in this current climate. After all, fathers are men, and it is men who are committing these heinous crimes. Therefore, we should be the ones at the receiving end of the "burden" of fighting gender-based violence, the abuse of children, femicide and murder. "Can't we get just one day to ourselves", no! Not until women can live a life that is free from fear, a real threat to their life and worse, actual death.

We shouldn't catch a break from the carnage we bring into our society, like how women aren't able to spend a single day without reminders of their precarious state. That is a small price to pay.

And, we cannot centre the conversation around the existence of good men as that does not invalidate the many bad men that exist among us. And, importantly, our silence would be an endorsement of this toxic system that we are benefactors of - patriarchy; a system detrimental to us too.

Often, in conversations on the heinous crimes men commit against women and children, detractors state that objectively, the number of men murdered far exceeds that of women murdered.

What they fail to admit is that, it is men who kill other men. It is men themselves who drive up the numbers.

According to the Institute of Security Studies, in the SAPS Annual Report for 2016/17, men made up the largest proportion (82%) of murder victims with 15,547 cases. Where perpetrators were identified, almost all (96%) were men.

The argument that more men are killed than women, and therefore we need to divert attention towards the plight of men instead, does not hold water. What these statistics show is that men are the common denominator.

If anything, this shows that men, children and women can equally benefit from attention being on the behaviour of men in how they think of power, their levels of violence and the role they play in raising boys around them - especially in ensuring they aid boys in unlearning their toxic notions of masculinity. These tough conversations are important, even on days that are meant to celebrate us. Until our society isn't perishing because of us, we do not deserve a day "off".