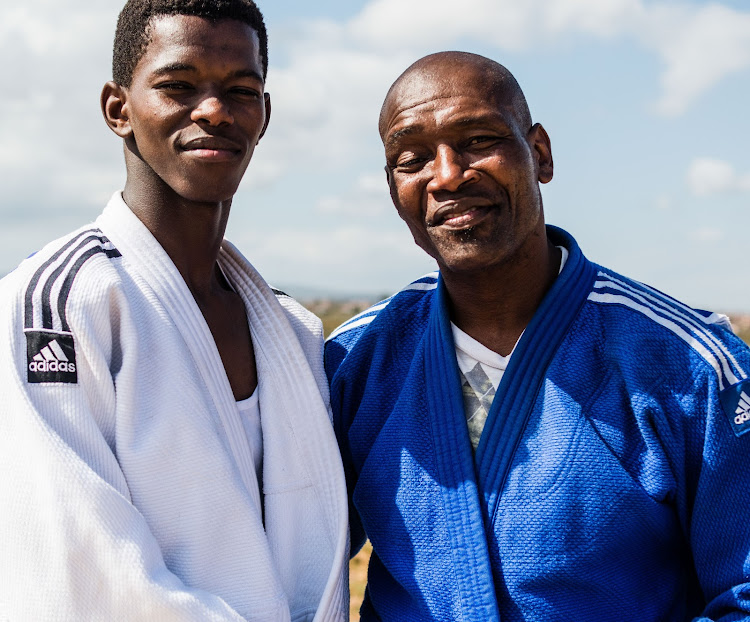 “Judo is not from here.” Sixteen-year-old Lithemba Magajana stands tall, the bright white fabric of his judogi a striking contrast to the dusty Eastern Cape landscape behind him.

Having just returned from the African Cadet Judo Championships, he is the top South African contender in his division.

The path to conquering a foreign art has been laden with obstacles. But his father, Mzwandile Magajana never leaves his side. Together, they’ve fought to come together through the sport in a time when many families are falling apart.

Magajana has only been a judoka for six years. In this time he’s risen from student to champion. What seems near-impossible for any sportsperson is enabled by persistent guidance and encouragement.

Magajana’s father doubles as his coach, fortifying his expertise and acting as his pillar of strength. “He supports me through every tournament,” Magajana says. “We develop new skills together and show each other moves.”

This year, Magajana qualified to compete internationally. Then he was dealt a painful blow. Judo South Africa would not fund the trip for just one competitor from the province.

A hardworking Magajana was left sitting on the seat of despair. R22 000 was the price of his dream, one the family didn’t think they could ever afford. But Magajana’s father would not let his son’s extraordinary talent go to waste.

Sacrificing and scraping together every last cent, he made sure his son would have the chance of a lifetime.

When Magajana returned from the championships in Burundi, the medal around his neck served as a triumph for both the young fighter and the coach who helped him earn it.

“Not only does he come to all my matches, but he always sees me win,” Magajana says. “Not many kids can say that.” Through Magajana’s hard work and his father’s guidance, the country has gained not only a champion but also a beacon of hope.

Judo may not originate in South Africa, but the Magajana’s stiff uniforms, are a national symbol of the powerful bond between father and son.

WATCH |Meet the leader and keeper of this community

The only knowledge Songelwa Sicuku-Mkita had about her father came from rumours.
SebenzaLIVE
2 years ago

WATCH |How kids in Khayelitsha are stretching their minds with yoga

School is stressful. Learners have to attend lessons longer than their attention spans.
SebenzaLIVE
2 years ago
Next Article