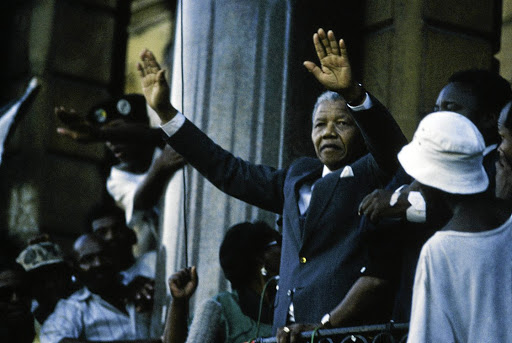 Nelson Mandela's release signalled the final dash to freedom for South Africa but that did not lead to the end of socioecomic problems in democracy. /Louise Gubb/CORBIS SABA/Corbis via Getty Images

Among the many extraordinary moments in the ANC's long history was the release of Nelson Mandela in 1990 and the liberation of SA in 1994.

The first occasion signalled the final dash towards freedom, while the second created the possibility of transforming the state from a slave master to the guardian of human dignity.

The time of Covid-19 could be another landmark if fully seized.

But the old order and its allies had a different agenda: give up the reins of government but fortify their grip on the economic status quo.

Global neo-liberalism was their ally and demanded that the ANC government uphold property rights and the free market economy - properties acquired through theft and wealth gained through slavery.

The ANC used state power to provide services, such as modest housing, access to health care and educational opportunities for the indigent population. These basic reforms were unaccompanied by gigantic retooling of the productive sectors of the economy.

Instead, the unfiltered opening up of the economy to global markets devastated industries such as textiles and institutionalised anaemic jobless growth. The gap between the rich and poor expanded even further.

The first two presidents maintained their integrity and those of the institutions of the republic.

Nevertheless, there were awful undercurrents in the party bent on using the public sector for personal gain. The tide turned in the latter's favour in 2009 under Jacob Zuma's leadership, and a decade of looting and institutional destruction ensued.

The remaining few days will be crucial in determining how the government approaches the systemic easing of the lockdown at the end of April.
News
1 year ago

President Cyril Ramaphosa restored some dignity and competence, but the rot in the party remains deep. An effort has been made to clean up the mess, but the damage to major state-owned enterprises, which are key to economic rejuvenation and the fight against neo-liberalism's final assault, continues.

Sadly, the Ramaphosa government appears wedded to a neo-liberal strategy and there are valid worries that it might auction off most of the state-owned enterprises. Such a move will allow white capital and their black comrades to tighten the noose on the indigent population, naturalising the horrid legacy of apartheid.

Covid-19 arrived on the shores of a country ill- prepared. But Ramaphosa demonstrated high quality leadership as his government pre-emptively responded with alacrity.

Yet the virus uncovered the poverty and squalor the majority of South Africans live in.

The mobilisation of the entire population against the virus and the ensuing social solidarity affords the country the chance to defeat the disease.

However, it will be the height of folly to go back to business as usual and ignore apartheid's deep deficit, which neo-liberalism and corruption have reinforced.

The current moment offers Ramaphosa and the ANC an ephemeral opportunity to rediscover its soul by shedding the delusion of neo-liberalism and focusing on building a productive economy that will offer real, dignified work and livelihoods.

The Western Cape expects to have a shortfall of 750 critical care beds if the province hits an estimated peak of 80,000 Covid-19 infections, premier ...
News
1 year ago

Something good might come out of the coronavirus pandemic

The Covid-19 pandemic has me thinking of the lack of investment into our health services by African leaders in particular.
Opinion
1 year ago
Next Article