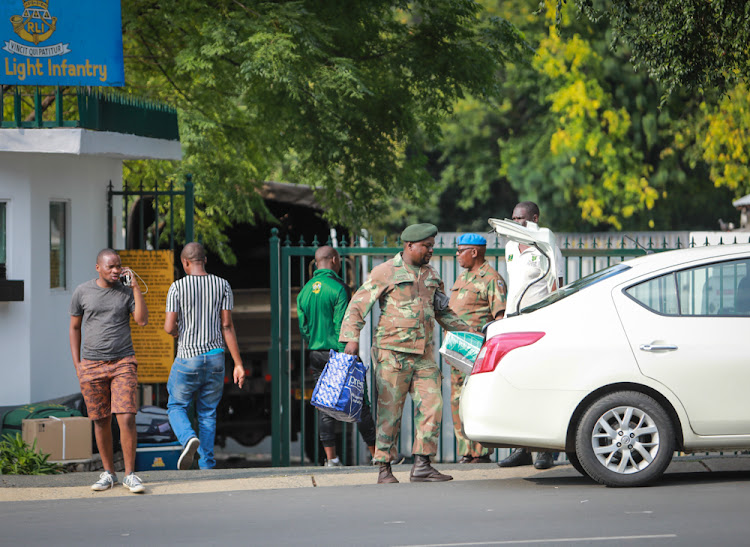 Soldiers will now move beyond just enforcing the lockdown regulations on the streets with the additional personnel set to screen people on roadblocks, set up field hosptials and deliver water to communities.

President Cyril Ramaphosa deployed additonal 73 180 SA National Defence Force (SANDF) members on Tuesday to support government departments and to control border line to combat the spread of the coronavirus in all nine provinces until the end of June.

He said most of the deployed soldiers will now be assisting the department of health with the fight against Covid-19, pandemic through tasks such as quarantining civilians and delivering personal protective equipment (PPE) to those on the ground.

President Cyril Ramaphosa is reportedly set to deploy over 73,000 more soldiers onto SA's streets, at a cost of R4.59bn.
News
1 year ago

Through the SA military health services, they will establish military field hospitals in the provinces mostly affected by the novel Covid-19 including Gauteng, Western Cape, Free State and KwaZulu-Natal.

The SANDF yesterday briefed the parliamentary committee on defence on the deployment of more soldiers by Ramaphosa this week at a revised budget of R4.5bn.

Gulube told the parliamentary joint standing committee on defence that the budget was also allocated to procure PPE items such as masks and gloves for the soldiers on the ground.

"KwaZulu-Natal is one of the provinces that are the epicentres of the viral epidemic. We do not have a military hospital in KZN, so we will be establishing temporary facilities on the grounds of the Natal military command centre in order to support the province."

He said they would establish four military hospitals as well as a number of other field hospitals in other areas, including the Pretoria Showgrounds and others in the Eastern Cape.

Gulube said the health facilities they would be establishing were expensive and that they were looking into making them permanent post coronavirus outbreak.

"All of these military hospitals require medical equipment. When we talk of medical equipment of a field hospital, you imagine that we have to establish the ICU units they are very expensive.

"Just their beds alone - electric beds and electric mattresses they will be have to be accompanied by various ventilators as well as oxygen generators in case we run out of oxygen. We have also have to establish dialysis machines.

"The president has advised in the command council that as we establish these hospitals, we should be looking into the future.

"How are we going to be able to use these hospitals? Immediately as temporary shelters but moving forward some [will become] permanent structures so that the legacy of Covid-19 should include the improvement generally of the healthcare facilities through the country."

Cyril Xaba, the co-chairperson of the joint standing committee on defence, said the cost implications for deployment was necessary in the context of the unprecedented nature of the disease, which demands an extraordinary response.

"Of critical importance is the deployment of the South African Military Health Services and its capabilities, which is necessary to support the department of health when considering the trajectory of infections expected as per research by experts," said Xaba.

"Furthermore, the committee is satisfied with the reason that the initial 2,820 deployed was insufficient, considering the expected scale of the disease."