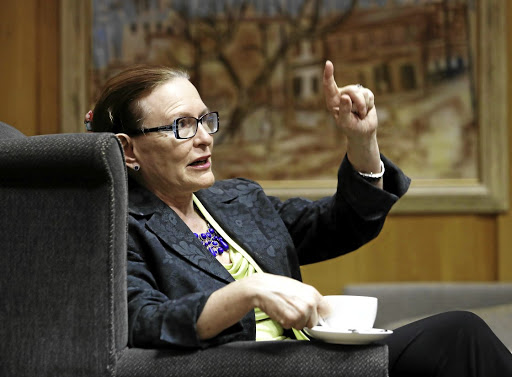 Helen Zille and fellow liberals struggle to get it right with racism, as Fred Siegel had observed in his book 'The Revolt Against the Masses'.
Image: ESA ALEXANDER

On 22 July 2019, former DA leader, Helen Zille, delivered a lecture on liberalism, titled “Keep on Fighting”, at a function of a small association called the Liberal Club.

Mrs Zille’s opening remarks made it plain that her lecture was crafted to mark her grand entry into the liberal think-tanking of the Institute of Race Relations (IRR).

Strictly speaking, Zille lost no election, but she has gained a think tank in her new role as a research associate at the IRR.

Maybe that is neither here nor there. What is more important are Zille’s views on liberalism.   As an avowed “classical liberal,” Zille would always be expected to pick a fight with Vladimir Putin when he dumps liberalism into the dustbin as an “obsolete” ideology.

The problem, though, is that both Putin and Zille are dogmatic ideologues working to prove the supposed correctness of their opposing ideologies – nationalism or liberalism.

Due to her subjective standpoint, Zille cannot see beyond the metaphorical end of her short ideological nose.

In the first place, Zille’s deployment of Germany as the starting point of her musings betrays the worst form of obfuscatory revisionism. With its nationalistic Nazism of the 1930s and ’40s, Germany is the last place to lay claim to liberal credentials. Leave innocent Angela Merkel out of it!

Even Immanuel Kant himself held racist views about Africans collectively, not as individuals – thus polluting the individualist purity of his very own Enlightenment.

To remind Zille: Kant wrote in his Observations on the Feeling of the Beautiful and the Sublime that “The Negroes of Africa have by nature no feeling that rises above the trifling. … they must be driven apart from each other with thrashings.”

Mrs Zille’s nationalistic German impulses also seem to have blinded her to the truth that Britain is the origin of liberalism. John Locke’s Treatise of Government, published in 1689, was among the first serious treatments of the liberal creed.

But the main defect in Zille’s disquisition is not who invented liberalism; it is her failure to acknowledge liberalism’s theoretical misrepresentation of the self and the political complicity of the ideology in the dehumanisation of nonwhite peoples across the world.

We don’t have enough space here fully to expose liberalism’s limited conception of the self, save to say that its central idea of a self who needs more isolation from than integration into society is as fallacious as nationalism’s obsession with the whole as if the part has no justifiable claim to existence.

It is in the “brothel of politics” where liberalism violently broke its own virginity – to borrow the graphically prurient imagery deployed in Zille’s own lecture.

When the British introduced liberalism to South Africa in the 19th century, it was meant to dissolve South Africa’s divergent native and Afrikaner nations into politically manageable ensembles at the hands of wealth-amassing British citizens.

Both Cecil John Rhodes and Alfred Milner were avowed liberals who were proud of the greatness of their mother nation – Great Britain.

As Rhodes and Milner butchered both Afrikaner and African, the Union Jack was flying high. Such was liberalism in the field of murder.

In The Revolt Against the Masses, American historian Fred Siegel wrote of a “liberal flight from evidence,” suggesting that, “Like devout Christians getting right with Jesus, liberals struggled to get right with racism”.

In her lecture, Zille projected whites in South Africa as an endangered species.  She flew from historical evidence to avoid getting right with her not-so-veiled racism.

The truth is that Tomas Paine’s idea of the “rights of man” – which inspired both the American and French revolutions – has never been understood by Europeans as being inclusive of black people.  That is why Helen Zille’s Liberal Club is very white and small.