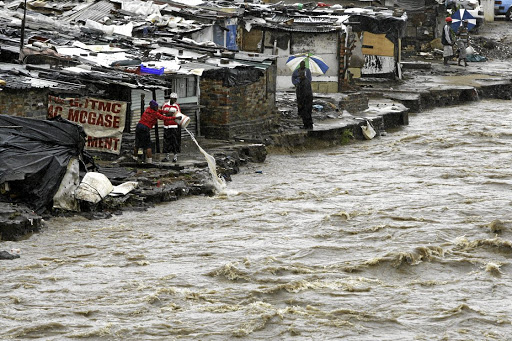 Any normal person being must be appalled that other human beings live the way people do in Alexandra, says the writer.
Image: Antonio Muchave

The residents of Alexandra are up in arms, rightfully so - even as it is equally true that ulterior political agendas are at play in the sad drama of that benighted township.

Any normal human being must be appalled that other human beings live the way people do in Alexandra. That children are raised in such squalor says a great deal about the resilience of the human spirit.

To be exact, it is not the whole human spirit that showcases its resilience in Alexandra today; it is the black spirit.

While the poor white problem of yore testifies to the existence of a similar spiritual fortitude among whites, we don't have practical evidence that white South Africans today can stand what black people must cope with in this township.

There is a mischief of memory about Alexandra. Most commentators and politicians who venture a word about the place paint a picture of ANC or DA failure. But the real story should not begin with the ANC and end with the DA. It must be told from its very beginning.

The ANC and the DA are an apotheosis of a socio-developmental mess designed deliberately by erstwhile white minority regimes that never associated black life with the quality of being human.

Thus, the tale of the this township must begin with the true historic fact that, originally, Alexandra came about as a result of the human-labour needs of English and Jewish white mining moguls who enriched themselves out of Johannesburg's abundant gold.

The grandchildren and cousins of the white people who caused the mess in Alexandra now live blissfully in Houghton and Sandton, behaving as if they have nothing to do with the social disaster in Alexandra today.

Whenever you hear a white person pass a haughty comment about Alexandra, you must remind them that their opulence is the source of this township.

But the story does not end there. It proceeds to a sadder post-1994 episode. We know that the whites who ruled SA during colonialism and apartheid did not think of blacks as fully human.

But how are we to explain the neglect of the ANC (black) government over the past 25 years?

In 1994, the ANC knew that Gauteng was the economic hub of SA, and indeed of the whole of Southern Africa.

Yet the ANC government neither adopted nor implemented a plan to ensure that people do not build shacks on top of each other in the Alex of the ANC.

Instead, the black elite of the ANC who used to live in Alex simply crossed the M1 to join the English and Jews of Sandton who have always thought of Alexandra as a dumping ground for black life.

The irony is that the ANC politicians who are called "Alexandra mafia" don't live there. They stoke political fires in Alexandra from their villas in Sandton. Whenever Paul Mashatile opens his mouth, we must ask him: Why did you and your ANC abandon black people in Alex for the past 25 years?

Even Cyril Ramaphosa must not be allowed to escape. When he dons a yellow T-shirt and calls upon Herman Mashaba to go to Alex, Ramaphosa must be asked: We know you are a very rich man, Mr President, what exactly have you done for the people of Alex?

Indeed, the story ends with the DA-led coalition government. It, too, must show us what it has done for the people of Alex in the two-and-half years it has been in office. Here is the truth: Alex is a product of colonialism and apartheid, combined with 25 years of ANC neglect. The DA cannot avoid this historic mess.